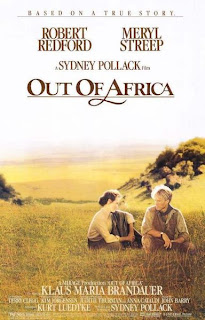 Early 20th Century. In order to escape from her boring Danish homeland, Karen Blixen marries Baron Bror in order to live with him in British colony Kenya on some farm, raising a plantation of coffee with Black people. Unfortunately, Bror drinks a lot and is absent from his home for months due to his job. When Karen gets contracted with syphilis, she returns to her homeland for treatment. Returning back to Africa, Karen starts running the plantation herself. She gains the sympathies of the natives and starts a relationship with the charming, but elusive adventurer Denys. When a fire destroys her plantation and Denys dies in a plane crash, she returns to her homeland.

Drama "Out of Africa" was based on true events from Karen Blixen's life whereby it applied honest but sustained emotions that never turn sappy, appropriately blended into the romantic story, giving the audience a good, but not especially inspired film that's today slightly forgotten and a one that after 2.5 hours of running time doesn't arrive nowhere. The landscapes of Kenya are wonderful, but are a weak equivalent for missing genius, brilliance or deep character development. "Out of Africa" unjustifiably won 7 Oscars (among other for best picture and director) and 3 Golden Globes, beating the excellent thriller "Witness" and even more overlooked, genius teenage tragicomedy "Heaven Help Us" - it's seems the academy loves sensitive or epic movies, but this time it was ready to even award an achievement that became slightly saccharine entertainment at times just to keep on with that rule. In exposition we find the heroine Karen hunting, angry because her lover Hans left her, so Bror ironically adds to her when she is shooting at a pheasant: "Just imagine that's Hans". Some problems in Kenya are banal, like when a lion attacks a cow and Karen can't find a gun so she chases him off with a whip or when the plantation catches fire in the middle of the night (!), and the story is heavily overstretched even though the director Sydney Pollack managed to give it more palpable virtues than some other kitschy director would have. Overrated actress Meryl Streep spasmodically interprets Karen and is completely miscast in her role, thus Robert Redford as the adventurer Denys is much better.