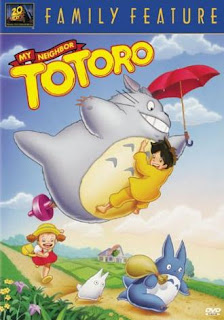 Little sisters Setsuki and Mei arrive with their father into their new home isolated somewhere in nature. Their mother is sick and is getting treated in a nearby hospital. The girls are playing or going to visit their grandmother, but one night they spot an unusual, giant cat-like animal near their tree and call it Totoro. Although the story that they hang out with Totoro and experience many adventures together seems strange, their father believes their story. When the mother catches a flu, Totoro brings the Setsuki and Mei to the hospital with the help of Kittie-bus.

Unusual, giant cat-like creature that appears as the trademark of every Ghibli studio film originates exactly from anime "My Neighbor Totoro". The film is supposed to be excellent, but it isn't really. Namely, although it comes from Hayao Miyazaki's most inspired phase, from the '80s, it still somehow seems ephemera and unexciting, turning as the only "misfire" in his golden '80s era where he made only excellent films. Miyazaki's suggestive style continues to contain sparks so that many scenes seem impressive, for instance the one where the girls Setsuki and Mei are nonchalantly playing on the meadow or conducting a salto or when Totoro gets scared when he hears the sound of an opening umbrella. Also, the respected old master of animation displays the story so innocently, pure and morally that he isn't even bothered by the scene where the father is bathing naked in the bathtub with his under aged daughters, radiating understanding for Japanese culture and mentality, but he didn't elaborate enough the connection between the fantastic and realistic story and lacked the stimulative style, turning the cute, simple, sometimes pale "Totoro" just into a neat film for little kids, and less for universal audience.

Must check out these films. I've seen Miyazaki's later films, but not these three

In my opinion, he was the freshest in his early phase, in 70s and 80s. But, that's just my opinion - many love his last few films the most and consider them superior.