Castle in the Sky 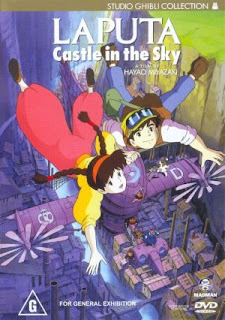 Somewhere in 19th Century: flying pirates attack a Zeppelin but little girl Sheeta manages to escape and falls down through the clouds. But her magical crystal she is wearing stops her fall and she gently lands in some industrial city in arms of a boy called Pazu. But Dora, the mother of the pirates, finds them and chases them until they find refuge in a cave. They soon get captured by the henchmen of evil Mooska who believes Sheeta is an ancestor of Laputa, legendary lost flying city. Dora and the pirates feels remorse and join forces with Pazu to rescue Sheeta. Mooska uses the crystal to find Laputa - empty, but full of weapons that can be used to rule the world. Sheeta and Pazu start the Laputa self destruction mechanism with Mooska in it and get rescued by the pirates.

"Castle in the Sky" is one of the best anime achievements Hayao Miyazaki ever made, superior to his too serious "Princess Mononoke" because the author displayed a wonderful sense for humor and romance. After an anime for adults, Miyazaki crafted an anime for kids, which is exactly what "Castle" is - a kids movie, but a movie that shows what kind of amazing kids movies with style can be made that are so excellent that they universally captivate, even the adults. After the exposition, the author shortly introduces a whole array of flying towns thanks to propellers, even having their own earth and lakes on platforms, but then a cut follows and the story switches back to the events revolving around girl Sheeta and boy Pazu. The landscapes in most movies don't play that big of a role, but here they are truly fascinating and wonderfully animated (for instance, one building is placed so that it seems as if it is "stuck" vertically in the middle of a cliff) and the naively, refreshingly simple humor is poignant, like in the scene where a brute pirate in fancy white suit challenges and fights an equally strong villager; both of them try to scare each other off by daringly inflating their chests until their clothes rip off and start hitting each other with a smile. This enigmatic anime is by some considered to be one of the best Ghibli films of the 20th Century, thus it's a real defamation that it didn't win any Oscars - a prize that a weaker anime succeeded in winning, "Spirited Away". A little flaw is non-the-less the structure of the narrow story that could have showed Laputa in much greater detail, and not in such sparse manner. Still, despite meandering of the plot in many different genres, "Castle is the Sky" is wonderfully anti-cliche (the character bad guy, Dora, mother of the pirates, half way into the film changes her mind and becomes a positive, good person) and a virtuoso achievement, full of golden moments.