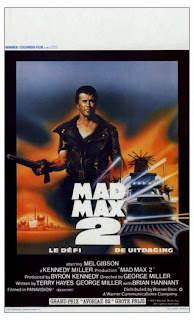 In the future the shortage of oil and fuel hit the world, causing different gangs to fight each other for it. Max, former police officer who lost his family, is now aimlessly driving through the desert with a dog. After repelling a gang who attacks him, he encounters a pilot with a snake and forces him to tell him the location of a unknown oil refinery. He soon arrives there and joins the men from local attacks of a gang lead by Lord Humungus. He manages to get a truck that can transport a tanker-load of fuel and in exchange gets as much fuel as he can carry. He meets the primitive Feral Kid, kills the gang and becomes the hero of the compound.

Crude and brutal "Mad Max 2", the sequel to the equally dark original, is a realistic film, but pretty much just an inversion of "Bambi" - it's an film that emphasised the overall simplification of the world towards the bleak vision that, unlike the first film, showed the future as apocalyptic and backward. For many, "Mad Max 2" is even better than the original, but it seems many are giving it more credit than it deserves since it's a one sided story that doesn't hesitate to exploit the trashy side of it's iconography. In the interesting exposition, documentary shots of unrests due to the shortage of fuel are shown, together with scenes from the first movie, the director George Miller once again directs the story with a raw and wild style, while the primitive Feral Kid is especially disturbing. The movie is actually so intense that even today most TV stations tend to cut some of the most violent scenes, like the one where a man raises his hand to catch a metal boomerang that is flying in the air, but it just slices the upper parts of his fingers. It's a cold film that's not for the too sensitive, and Miller should be criticized for his tendency to maintain the viewers attention more with violence and excess and less with quality and style, but the macho version of "The Seven Samurai" story about the title hero who helps save a outpost from bandits has it's moments, among them even the amazing finale, a 15-minute long car-truck chase realized almost without any dialogue. "Mad Max 2" is something like a hot paprika: many people will simply not like it, but there will also be those who enjoy it's spicy, bitter flavour.

I love this movie. I really do. It's my favourite out of the "Mad Max" films, and I think it's one of the finest action films ever done. I prefer it over the first one.