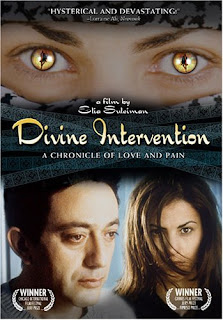 People of Israel and Palestine are acting strange. 4 youngsters are prosecuting Santa Clause. An angry old man is driving in his car and insulting a passer-by. A woman is is throwing garbage into the yard of her neighbor. One man is throwing bottles at people. At a checking point in Jerusalem one miraculous woman is passing the border by "hypnotising" Israeli soldiers. She is on her way to meet her boyfriend, a Palestinian E. S. who lives in Israel. In the end, his father dies.

"Divine Intervention" is one of the most noticed films from Elia Suleiman, Arabic director born in Nazareth, known for such strange films like the short "Cyber Palestine". "Intervention", nominated for a Golden Palm in Cannes, is a stylishly absurd, nonsensical episodic satire on the brink of Bunuel's "The Phantom of Liberty", but a one where a shorter running time would have suited it better, let's say around 50 minutes, and not 90 minutes which seem slightly overstretched. Although it doesn't have enough inspiration for it's surreal setting, many episodes are excellent: for instance, the one on the blocked checking point in Jerusalem where a mysterious woman in short skirt and sunglasses simply crosses the border, passing by "frozen" soldiers and a control ramp which falls apart, or the bizarre one where a balloon with a picture of Yasser Arafat gets stuck over the al-Aqsa mosque in Jerusalem. It's clear that the director/actor Suleiman shows the chaos in his homeland due to nonexistence of identity - his character, the main protagonist E. S., doesn't even say a single word during the whole film (!) - and obviously hints at Palestinian cause, but in that intention he is almost always neutral, calm, wise and objective, mostly refusing to resort to cheap propaganda or to show Jews in a negative light, which is welcomed. Still, one sequence did break that rule and turned out a little bit over-the-top: it's a fantasy sequence where a masked woman starts levitating and stops the bullets of six gunmen. The bullets start rotating around her head while she kills a few gunmen with a knife in shape of a half-moon. Then the colors on the ground phantasmagorically form the shape of the Palestinian flag while the woman destroys a helicopter with a boomerang - the whole thing is exaggerated, shallow and crude, with obvious messages that contrast the majority of the film's tone. Although it has flaws, "Divine Intervention" is an interesting film that works subconsciously and with enough virtues.