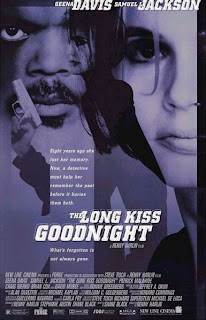 Samantha Caine is a normal school teacher and a mother of a little girl, living in average marriage with her husband. But after a bump on her head, she starts remembering her past as an assassin. She hires investigator Mitch and after an attack rides off with him to find out who she really is. She contacts Dr. Waldman who reveals that she is really Charly Baltimore, an assassin who worked for CIA before she lost her memory during an assignment and disappeared. Charly discovers her previous boss Leland is collaborating wit the terrorist Timothy in order to detonate a chemical bomb in Niagara Falls to secure funding from the government. She and Mitch stop and kill them and continue living undercover.

"The Long Kiss Goodnight" is a preposterous film, an action marathon of madness and dumb ideas that are so over-the-top that the authors should have seriously considered to turn it into a comedy, instead of proceeding with the naive concept of a tough "housewife assassin". Geena Davis and Samuel L. Jackson are very good in their roles, and it's a refreshing idea to have a female hero in an action film, but the whole thing is executed in such a dumb and cliche way that the viewers will slam their heads towards a wall. Firstly, the action is totally unrealistic and mediocre: imagine this, in one scene, Samantha and Mitch are in the hallway of a building and a grenade is thrown on the floor. They run towards the window for about 20 seconds (!) and shoot it open, when the grenade finally goes off. Of course, the flames of explosion are nearing towards them, but they are faster and jump "just in time" out through the window, falling towards the ice. But Samantha still has time to take her gun and shoot a hole in the ice in order for the two of them to safely fall into the water. What a nonsense. Secondly, the story is killed with ludicrous cliches: it's equipped with wild loud car chases, explosions and, best of all, frenzy bad guys with deranged stares and mad lines. In one of them, Samantha is about to get tortured by getting placed into ice cold water, and the bad guy can't resist but to comment with a useless line: "A woman's face never looks quite so beautiful as when it's distended in pain...Witness the beauty of childbirth". This is such a joke that it becomes a joke of itself. Thirdly, the direction is average at best, filled with wrong decisions. The movie is trash and it would have been forgotten hadn't it been for one little detail. One little unusual moment. It's the one 90 minutes into the film, when CIA man Leland starts explaining Samantha that he is going to conduct a fake terrorist attack to raise his funding. Samantha is confused and he explains: "Well, unfortunately, Mr. Hennessey, I have no idea how to fake killing 4,000 people - so we're just gonna have to do it for real. Blame it on the Muslims, naturally. Then I get my funding". Obviously, the thing has got to be a freaky misconception due to film's non-stop over-the-top imagination, but some conspiracy theorist actually took it seriously and got their own vision about what happened 5 years later.