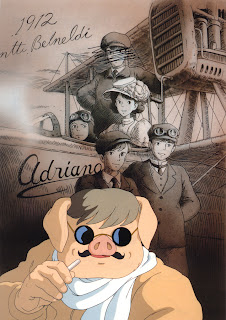 Italian coast, 1930's. Porco Rosso was previously called Marco and looked like a normal man up until one air battle in war when he was transformed into a man with a head of a pig. From that point on, Porco denounces war and works like a local coastal guard around the Adriatic coast fighting pirates that attack ships. But after the Fascists take over the government, he leaves his job and arrives at his friend the mechanic. When he leaves, the mechanic's granddaughter Fio sneaks into his airplane. The duo lands on the beach but gets trapped by pirates. Porco decides to challenge their leader Curtis, but nobody wins. Fio gets released and Porco leaves for his love, Gina.

Anime film "Porco Rosso" is one of the most unusual achievements from the famous Hayao Miyazaki: although the story that plays out during the Fascist rise on Italian territory seems fairly normal, it has the adornment of a radical fantasy detachment - namely, the main hero Porco Rosso, is a human with a head of a pig. Considering that he transformed into that form when he was an pilot during World War I, it's not hard to conclude that Miyazaki juggles with symbolic antiwar elements, presenting war as a state that permanently "scars" people (in this case not so much physically as phantasmagorically). There is even a scene where the pacifist Porco says: "I would rather be a pig than a Fascist". Miyazaki's frequency of thinking can be best compared with John Ford's since he likes to objectively, directly, yet passionately display a neat structure of a story, and despite a dark theme "Porco" is a cheerful and optimistic children's film with meticulous details and gags (on a ship, pirates kidnap little children who just laugh unconcerned and smile all the time; Curtis and his rival Porco are flying in a duel and throw tools at each other, yet they always "avoid" the hit by moving away with their planes), becoming only the second Miyazaki film where a hero is a man, but the film as a whole doesn't seem to know what exactly it seems to say and feels shaky, unsure and rushed, the weak point reduces the meaning of it while the monotone rhythm failed to stimulate on all levels, even though the film has it's moments.