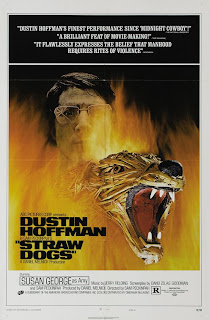 David and his girlfriend Amy move out from America to an isolated English village. David plans to write his book about the physics in peace and in order to place the roof on his garage he unwillingly hires primitive Norman, Chris and Charlie. The three of them are obsessed with Amy and provoke David killing even his cat. While he goes out hunting with them, Charlie enters his home and rapes Amy, but she doesn't say anything to David. When David gives refuge to the mentally handicapped Henry who is falsely accused for a crime, the villagers siege his house. Norman, Chris and Charlie violently break into his home, so he kills them in self defence and leaves the village.

In Kubrick's film "A Clockwork Orange" scientists are trying to break the habit of violence from the anti-hero Alexander with the help of horrifying, naturalistic violent movies. Among them would definitely be controversial "Straw Dogs", coincidentally released the same year, in 1971. Truly, that bitter drama virtuously connects a lesson about how aggressiveness is disgusting and primitive by simple, uncanny demonstration of violence - much more even than the infamous Sam Peckinpah's "The Wild Bunch" - with Greek tragedy and art. As always, Peckinpah shows his fascination with the effects of violence on humans and their relationships by presenting hate as something animal, resorting to a vision without a compromise. From the 40 minutes long, quiet exposition that has the impression "Threat" written all over it (drunk Tom demands another beer but the barmen puts his hand on the glass cup on and puts so much pressure until it breaks; worker Chris steals and smells Amy's underwear; Amy sticks her bubble gum on David's blackboard) through the tangle where Charlie rapes Amy but she doesn't say anything to David, up to the frenzy finale where the villagers put David's house under siege and he fights them off (he kills Charlie by putting his neck into the bear trap) that's full of adrenaline rush, "Straw Dogs" present a violent commentary on the problem of pacifism when faced with violence, and are a fascinating forerunner to "Rambo" and an excellent film about morality in one. Dustin Hoffman once again proved he can play absolutely every role - he played a comedian, a tragic figure, an introverted man, a mentally handicapped person, an extroverted man, and here he even turned into an action hero without a problem.