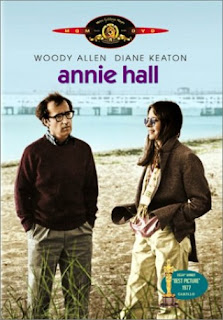 Alvy Singer, a Jewish comedian in New York in his 40s, is having problems because his every relationship fell apart. He remembers how he grew up in Brooklyn when he was a kid, how he wrote jokes for other entertainers until he tried to perform himself and how he eventually started visiting a psychiatrist until today. One day, as he was playing tennis with his friend Rob, he met Annie and started dating her. For the first time he senses this romance has a future and falls deeply in love with her. But with time problems occur and Annie breaks up with him.

"Annie Hall" is, unlike other comedies, a very personal comedy, and that's why a lot of people tend to not understand it - or to even try to understand it. But if they ever tried to connect to the film's unusual level, they would maybe realize that there's a lot of amazing things in this shining film, the best Woody Allen ever made. Allen's fans will notice his films were pretty weak, thin filmed before 1977, than the most he did after that, which were more complex and demanding. In that aspect, "Annie Hall" was his revolution - like all of his films, this one is also hermetic and some will even find it boring, but Allen is simply a static, understated author whose emotional stories tend to be as introverted, as routine as real life, but he manages to discover magic in that routine: for instance, when Annie and Alvy are out on a balcony they talk about art, but the subtitles in that scene "translate" their dialogues and tell what Alvy's really talking, about how he finds her attractive and wonders what she looks like naked!

Even later on the film proves to be so innovative that even Godard would be jealous of it: Alvy is walking down the street saying how he saw Disney's "Snow White and the Seven Dwarfs" when he was a kid and fell in love with the witch - and in the next scene he is shown in that animated film, discussing with the witch, about their marriage and her period. While Annie and Alvy are having intercourse, he complains she is "distant", and her soul is seen leaving her body and doing something else. While watching a basketball game on TV, a woman asks Alvy why he would watch "sweaty men with a gland disorder fighting for a ball". Winner of 4 Oscars, 5 BAFTAs and one Golden Globe, this simple comedy is so full of genius scenes and dialogues many of them fly off so fast that some won't even register them, but it's so rich with abstract beauty, male-female observations and sadness non the less. Because of it's surreal tone and dry cleverness, some will be quick to dismiss "Annie Hall", not seeing trees from the forest, and the quiet romantic masterpiece hidden in that unbelievable hermetic style.