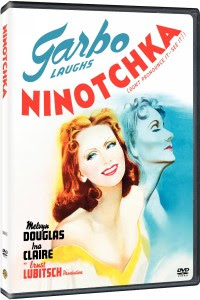 Paris. Soviet emissaries Buljanoff, Iranoff and Kopalski got the assignment to sell valuable jewelry to fill their country's scarce treasury. But they get into trouble because the jewelry is also claimed by Duchess Swana so her lawyer Leon suggests the trio to split the profit after an eventual sale. In order to settle the matter, official Ninotchka was sent to Paris, an cold blooded socialistic prototype. But she starts enjoying in capitalism, falls in love with the "enemy" Leon and eventually softens. But Swana forces her to immediately return to Moscow and leave Leon in exchange for the jewelry. Leon is forbidden to go into the Soviet Union, so he arranges for Buljanoff, Iranoff and Kopalski to make trouble in Istanbul. Ninotchka comes to bring order and meets Leon again.

Shining comedy "Ninotchka", written among others by Billy Wilder, is devastatingly elaborated and subversive in criticizing Communism, but the whole story works on so much deeper levels. The whole semi-realistic tangle is just an excuse to introduce the brilliant character Ninotchka in a setting out of her place - she is actually an anti-human: she is obsessed by the rules of Communism, cold, mechanic, slightly misanthropic, without emotions or happiness. In a way, she is a lot like the heroine from the animated series "Daria", and Greta Garbo plays her brilliantly. The minute she enters Paris she starts talking hilarious statements: when the three Soviet emissaries (whom were already "spoiled" by the Capitalistic way of life since in one scene one of them insist they take an elite, not a shabby hotel, because who would want "a pipe out of which when you press for hot water, cold water comes out , and when you press for cold water, you don't get nothing?") were expecting a male superior and were surprised when they got Ninotchka, she just replies sternly with: "Don't make an issue of my womanhood".

Later on she says to a butler that he will one day be free, to an Aristocrat that he will die out and for love that it's "just chemistry" - but in a Capitalistic country she meets Leon and falls in love with him, starts changing, softens up and starts enjoying life. The whole sequence where Leon is trying to make the too serious Ninotchka laugh in a restaurant is genius, from his silly jokes ("How many people live on the Moon? 500 million. But it must be crowded during half-Moon!") up to the point where he accidentally trips and makes her burst in laughter completely by accident. Some noted that the film exalts the power of Capitalism too much, but the story handles actually something different: the search for happiness and the spirit free from boundaries of stiff rules. Ernst Lubitsch directs the film competently, and the amazingly written screenplay is full of highlights and surprises, like the fantasy scene where Lenin smiles on a photo. "Ninotchka" was nominated for 4 Oscars (best picture, actress Greta Garbo, original story, original screenplay).