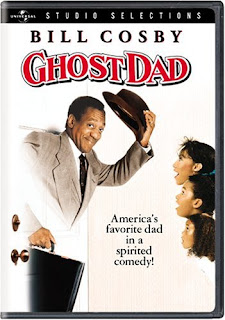 Elliot Hopper is a widowed father who is so preoccupied with his work that he rarely has time for his three kids; when he forgets Diane's birthday, he decides to buy her a car. He survives a fall of the elevator, but not a taxi drive of a Satanist that ends up in a river. When Elliot climbs out on the surface, he notices he is just a ghost but that he can talk wit people with a lot of concentration. He flies off to London where he meets scientist Edith Moser who gives him 4 days before he must leave to the other world. Elliot contacts his kids and tries to make an insurance on himself so they could collect the money, but Diane falls from steps and dies. Elliot and Diane return to their bodies and become alive again.

It's truly hard to figure out why the respectable actor Sidney Poitier decided to direct the overstretched and only sporadically funny family comedy "Ghost Dad" that would have been downright awful hadn't it been for the excellent Bill Cosby. The movie wasn't a hit because the audience was scared by the anxiety of the plot: namely, Cosby's character Elliot dies, so his kids become orphans. There's also a lot of unnecessary banality, like Elliot's travel to some bizarre scientist of the paranormal Edith Mosner or the fact that people can see him in the dark, although he is a ghost. One of the better gags is the one where Elliot's daughter is listening to his stories over the phone or when he drinks a drink that goes right "through" him. "Ghost Dad" is a simple comedy poor with humor, with a plot that was already handled a lot better in previous films, but an easily watchable, cute achievement with a humane touch, and at least it managed to resist turning vulgar or primitive.