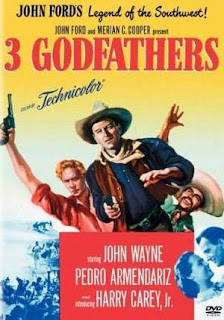 Arizona. Three outlaws; Bob, Pedro and Bill, enter into a small town where they make a joke on the expense of Mr Sweet because of his name, but he turns out to be the sheriff. The trio robs the bank and escapes, but Bill gets wounded and the sheriff starts hunting them. The outlaws' horses run away, but in the middle of the desert they find a wagon with a pregnant woman. She gives birth to a son and dies so they decide to take care of the baby. On their long march to the city called New Jerusalem Pedro and Bill die, but Bob manages to reach a saloon with the baby. The baby turns out to be the nephew of the sheriff who reduces Bob's punishment in the jail.

Ironically, the director Satoshi Kon made with the loose animated remake "Tokyo Godfathers" a better film than John Ford's original "3 Godfathers", an unusual western that almost seemed as if it was imitating Capra's touching melodramas. Neither "3 Godfathers" leave an indifferent impression with their fluid rhythm and contain unusual archetypes for the western genre - the story plays out during Christmas, the three outlaws become good saviors, Biblical metaphors - but it consists out of two uneven parts that seem clumsy, unbalanced and incompatible. Ford has inspiring camera angles and his style leans heavily on classical narration, while the details are at times very good (when the mother dies, the wind in the wagon blows out the candle; the tree outlaws give the baby their three names) but the time is passing slowly while the scene were a exhausted Bob is cheered by the ghosts of Pedro and Bill seems almost insane.
Grade:++
Posted by Marin Mandir at 6:47 PM