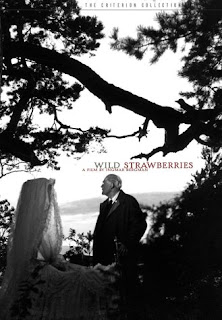 Isaak Borg is a 78-year old doctor who got an invitation to go to Lund in order to receive a honorary degree from the university during his 50th anniversary of his graduation. He is a rich but lonely man who is considered egoistical, while his only company in his empty house is a maid. On his journey he is driving with Marianne, the wife of his son. He stops at the house where he spent his childhood, encountering Sara, a young girl, and her two friends. Marianne announces to Isaak that she is pregnant, but that her husband doesn't want any children. Isaak arrives at Lund and gets his degree, realizing his life would have been different if he wasn't so pessimistic.

Drama "Wild Strawberries", nominated for an Oscar (best screenplay), 2 BAFTAs (best picture, actor in a leading role) and winner of a Golden Globe (best foreign language film), is flawed and slightly too indifferent for it's intimate subject, but as a whole it's still impressive in it's form of a psychologically-surreal labyrinth. Too much unnecessary babble once again annoys in Ingmar Bergman's calligraphy, but that director bravely directed some moments, especially the dream sequence in which Isaak is walking through a town with clocks without hands, only to find a coffin with his own body. The road movie format of the journey from Isaak's home to his old University symbolically represents his thinking about his whole life, where the honorary degree at the end maybe even seems like his final honor before death or his final graduation in life, were he gains scruple. Every character he meets on his trip seems as if he came from his childhood (for instance, he meets a girl called Sara - but when he was young, he also had a girlfriend with the same name). Also, Bergman was one of the first movie authors that dared to talk about the subject of couples without children: Isaak's adult son made it clear to his wife that he doesn't want to have kids. Elegant, simple, symbolic and demanding, "Wild Strawberries" deserves to be called a classic, but there is still something missing from it to be considered an honestly overwhelming film, instead of just an obligation to appreciate it due to it's high reputation from everyone else.