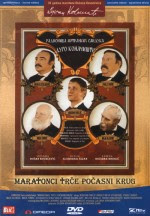 In 1 9 3 4 the Yugoslav king Alexander I was killed in Marseilles. Meanwhile, in Belgrade, a young lad, Mirko Topalović, is working as a undertaker, like everyone in his family, since "death is the only sure thing". His boss is his dad Laki, then his grandfather Milutin, great-grandfather Aksentije and great-great-grandfather Maximilijan. When their great-great-great-grandfather Pantelija dies, whose "last friend passed away somewhere near the end of the last Century", they decide to burn his body in the crematorium. At the same time, Mirko is in love with Kristina, a pianist in a cinema theatre, but her father is Billy who is still a great enemy of the Topalović family. Mirko catches Kristina with another one and kills her. With his family he takes his guns and kills Billy and his bandits.

After his great success with the brilliant comedy "Who's That Singing over There?", the director Slobodan Šijan once again joined his forces with the screenwriter Dušan Kovačević and hilarious comedians Pavle Vuijisić and Danilo 'Bata' Stojković, but this time in a dark, black comedy "The Marathon Family", a movie for a dimension weaker then his previous one. Among the curiosity of the film are the opening shots, which actually show the old footage of the assassination of the Yugoslav king Alexander I. in Marseilles in the 1930s, which may seem bizarre unless the story is an hidden allegory of the breakup of Yugoslavia (after Pantelija, the oldest member of the Topalović family dies, the family slowly breaks apart in violence towards the end, in which the young hero Mirko suddenly becomes a tough guy, which is reminiscent of "The Godfather's" hero Michael). The story about a family of undertakers is full of anarchic dark humor, on the verge of Monty Pythons and South Park, like when the great-great-great grandfather Pantelija dies and leaves all his inheritance to himself, or fried meat from crematorium that gets eaten by the family or when Laki was driving a car and unknowingly, accidentally hit a man, then stopping and wondering "what's he doing on the ground". "The Marathon Family" is in some circles considered "one of the best Serbian films of all times", but that's rather exaggerated for only a good film filled with sometimes banal humor and thin characters that inevitably crosses into misogyny, with a bizarrely pretentious end. "The Marathon Family" has a lot of genius scenes, but it's simply too morbid for some tastes.