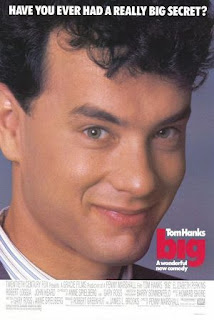 The 13-year old Josh doesn't enjoy being a little kid. One day he goes to an amusement park and stumbles upon a fortune-telling machine, "Zoltar Speaks", and wishes he were big. After paying he goes home and wakes up the next day - in the body of a 30 year old adult. His mother doesn't recognize him and thinks her child was kidnapped. The grown up Josh explains to his 13-year old friend Billy about his problem and they go on rent a room in Manhattan, getting a job at a Toy Company. Susan, his co-worker, falls in love with him. Josh finds the fortune-telling machine and wishes to be a kid again - and he does.

"Big" is a cute little film that some critics even regard as the golden standard in the long line of films where a kid gets trapped by some mysterious force in an adult's body - Tom Hanks is truly remarkable in the leading role, for which he won a Golden Globe as a best actor in a motion picture musical or comedy and was nominated for an Oscar (together with the script), but he is more or less the only great ingredient in it. The story is basically a one note joke based on the contrast between the grown body and the child's mind, but some of them are pretty amusing: for instance, in one scene the 30-year old Josh and the 13-year old Billy enter into an argument, and just when Billy is about to leave he adds: "I'm 3 month older than you are, jerk!" There are also a few "light" subversive ideas, like when Josh's own mother can't recognize him as a grown up and thinks her child was kidnapped or the tricky situation where Susan wants to sleep with the adult Josh, de facto not knowing he is actually a 13-year old mind, thus stepping into pedophile connotations. "Big" is a comedy with an unobtrusive message and small crumbs of wisdom when stating that even adults still have their children's elements, but with an standard style and slight vagueness, simple but sufficient enough to entertain and please the demanding viewer. "Big" isn't really a big film, but it definitely has enough virtues to be pronounced medium-big.