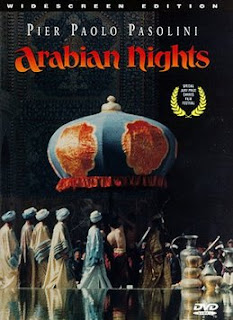 An Arab country. The poor Nur Er Din buys the Black slave girl Zumurrud on the market because she herself gave him the money to do so. After a few enchanting nights of love, Zumurrud gets kidnapped by a Christian who ties her up to a pole, but she frees herself. She accidentally stumbles upon a kingdom where she gets crowned like a king. Nur Er Din, after a long search, manages to find her and she embraces him...The second story: an old African man likes to kiss men and philosophise...Womanizer Aziz leaves his fiance for other women, so his penis gets pulled out...A lover of a woman under the surface gets transformed into a monkey by a wizard, and then into a man again...Sailor Yunan arrives at an island where he kills a boy in his sleep, following a legend.

Pier Paolo Pasolini's movies have some intellectually stimulating touch that makes them unravel almost as if you read a good book. He has some kind of a subconscious approach towards his hermetic stories that can't be understood at first, yet something stays deep in your mind after you have seen them. He is one of the few directors of his time who managed to use "low elements" to achieve high art. Due to his abstract ideas, he is a director who is going on your nerves, but you can't wait to see his next movie. It's hard to determine why he is so "repulsively attractive", but many of his small works, among them cult "Arabian Nights" - somewhere also translated as "The Flower of 1001 Nights" - are a small sensation. That erotic anthology movie consisting of 5 nonlinear stories, shot on various locations from Yemen to Nepal, abounds with bizarreness: the opening title states: "The truth is not revealed in one dream, but in many", and then it cuts to the main story where the Arabs want to buy slave girl Zumurrud, but she herself chooses her new owner, the poor Nur Er Din. In the second story the womanizer Aziz (Pasolini's regular actor Ninetto Davioli) shoots an "arrow" shaped like a penis into the genitals of his mistress. Still, some of his stories are also unintentionally comical and clumsy, mostly the one playing out in Eritrea in which a girl has intercourse with a young guy who is naked, but doesn't even notice it since he is asleep (!). Then she falls asleep and he wakes up and has intercourse with her, and she also doesn't notice it since she is also asleep. Since the two of them, and many other characters, are played by first and only time improvised "actors", they constantly giggle and act rather confused. Such flaws, but also the overstretched running time, mostly spoil the dreamy mood of this final part of "Trilogy of Life" that symbolically speaks about first love and the problems of the lovers in the hypocrite world.