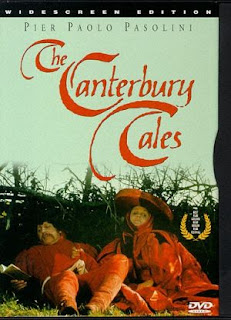 14th Century. A group of people tell each other stories to make the time pass: a rich old man, owner of a castle, marries the poor girl Maggio but she cheats on him with a young guy... Two men are caught having gay sex. One is rich and is thus able to buy himself out of the mess, while the other is poor and is burned alive by the church... Debt collector meets a colleague who claims to come from Hell... Clumsy happy man Perkyn does everything wrong and constantly falls into trouble, and thus gets executed...A student tricks a carpenter that the flood is coming to have an affair with his wife...Two young lads lose a horse so they decide to spend the night in a mill. At night they have fun with the miller's daughter, but he catches them and throws them out...Three friends find a treasure in the forest and kill each other from greed.

Anthology film "The Canterbury Tales", a loose adaptation of Geoffrey Chaucer's narrative poem with the same title, is the second film from Pier Paolo Pasolini's "Trilogy of Life", that ends with his next film, "Arabian Nights". Even "Tales" have flaws - some stories are better than the others, the characters are less important than the "author's vision", the mood is eclectic, the film as a whole too much roughly poetic - but it's still another good film from Pasolini, a intellectual and an artist whose movies make you think afterwards even when you think that some scenes look silly and stupid. The highlight of his creativity is definitely the third story - in it, Ninetto Davioli hilariously plays happy man Perkyn who reminds a lot of Chaplin's gestures and slapstick repertoire due to his antics; he winks to the bride on her wedding (!), carries a giant bowl when people in the line are waiting to get some soup; he has a dwarf father and a giant, 7-foot tall mother. Richly spiced with erotic but also amusing scenes (a young lad wants to kiss a girl, but she just farts in front of his nose), this is a flawed and hard to comprehend, but quality surreal movie.