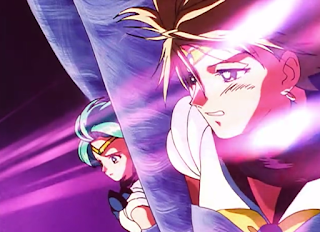 Usagi and the rest of the senshi discover that new enemies showed up, Death Busters, who are led by Dr. Tomoe, who is possessed by Pharaoh 90, an alien entity, and wants to find the Holly Grail in order to bring darkness to the world for Mistress 9. But mysterious new senshi, Sailor Uranus and Neptune, actually Haruka and Michiru, also search for the Grail in order to save the world. They are also joined again by Chibiusa.

If there was ever a reason for the “Sailor Moon” deniers to give that anime another chance, then it is: Haruka Tenouh. She is one of the most fascinating anime characters ever to show up and improve a show by giving it a “cool” edge, ever since Oscar Francois de Jarjayes – her entrance in episode 92, where she wears a fancy suit and enters the game arcade where Usagi and Minako mistake her for a guy and fall in love with her, is the greatest entrance of any character in the history of the anime in the 90s. It is really hard to think of any other anime character in that period that appeared with more style and class, except maybe Seiya in Stars season. Not to mention that Haruka actually invites Minako for a formula 1 match in a video game in that same episode, but when the game starts and Minako already starts to “drive” her car, Haruka just stays sitting with her hands crossed, not even touching the wheel - after some half a minute, she states that she wants to give Minako “a head start”, infuriating her. And yet, when Haruka starts to play the game, she wins anyway! It is simply fabulous comedy. And insanely fun. Her whole charismatic presence, and interaction with her girlfriend Michiru, is a 'tour-de-force' event that stirs up the story and refreshes it: they dominate every scene they are in. However, despite their obvious romantic interaction, there is not a single kiss between them in the entire anime: this proves that the LGBT themes were not imposed, and that their relationship is so carefully, subtly built-up just through hints. Despite a mild start of the first two episodes, the S season quickly widens its horizons and amazes with shining little details, among the best ones are the ones that pass by most of the viewers without getting noticed: the beautiful shot of Michiru’s painting in episode 93 that shows a whale emerging from a pink cloud in space, for instance.

Episode 110, where Haruka just looks at Michiru while it is raining in their apartment, and in a small collage all other senshi are shown, is an esoteric realm of senses that creates something out of nothing. The mood of their chemistry is simply irresistible. But there are also quite a few humorous moments that have not forgot about the title heroine: for instance, the subplot where Minako disguises herself as Sailor Moon in order to take the burden of Usagi and trick Kaori in 102 is hilarious, as well as a few satirical touches, like when a daimon in episode 112 “disintegrates” into a comic book it was made from, with pictures of its defeat. At its chore, the story examines two strategies of handling a problem – the hard line, utilitarian approach by Haruka and Michiru, who justify every mean for the goal and are willing to sacrifice the innocent, and the pacifist, humanist approach by Usagi who wants to achieve the goal without victims. Haruka’s line to Usagi in episode 102, where she tells her that “all people live because others have sacrificed their lives for them”, sums that up. This clash of consequentialism and humanism gives the story sharpness and pathos. And the Faustian theme involving Dr. Tomoe just completes it.

It is a dramatic irony that where homosexuality is considered a religious sin that two holders of the pure heart crystals that will create the Holy Grail are lesbians. Would have put and end to Haruka’s doubts about her strategy of sacrifice. Since Hotaru is presented both as the Messiah and the Messiah of silence, who can destroy the world and bring darkness, the authors cleverly slide their theme about how religion can be mistreated for evil causes, but also for something else: here, the anti-Christ comes as the Messiah. This season also features some of the best lines ever written in this anime, which arrive so swiftly they almost present their wisdom in a relaxed edition: for instance, in episode 120, where Dr. Ajimov gives his theory about parallel worlds, where “beings from another dimension could be among our world, but are invisible to us, just as we are invisible to them”, neatly gives a “logical definition” of the “Sailor Moon” world, where evil powers are among the humans, but they cannot detect them. Ajimov also gives, ironically without knowing it, the only introduction to Pharaoh 90, when he adds: "Perhaps it is true that the alternate universe in itself may be one giant life form", whereas Dr. Tomoe, who was watching his transmission on TV, just takes it from there and finishes his sentence by looking at the mini-wormhole in his laboratory and says: "The time for our beautiful space to swallow the Milky Way galaxy in its entirety is approaching". It is so subtle. You just connect these two lines and you have the explanation for the invisible enemy in this season, which is remarkably thought-provoking. In episode 100, Minako laments to Haruka, who gives her also another fantastic monologue: "I am not exactly sure what "ordinary" happiness should be. But I don't think my current self is abnormal. What I am now is what is closest to my true self". With the best writers contributing inspired writting to the story - Katsuyuki Sumizawa, the "master"; Shigeru Yanagawa, "the joker", and Yoji Enokido, "the poet" - they simply could not go wrong with this one. A masterpiece.

There are more than one reason to hate Sailor Moon, but only one to praise it, but that one reason is too powerful that overcomes all the reasons to hate. And that's Sailor Moon S. It has everything one could have desired in an anime.

I don't know what happened after "S" ended. It all went down the drain.

OK, a part of me agrees with you, but a larger part of me can't identifiy with that idea. You see, the objective critic inside me is aware of the flaws of Sailor Moon - monster-of-the-day cliche, melodramatic exaggerations, repetitive formula...

But something personal inside me somehow is strangely attracted to it. You can say that the virtues overthrow the flaws. This is a very specific and hermetic anime, and it's not surprising that some don't like it, while others do.

By the way, I don't know why you think "Stars" went down the drain, because it's arguabely the best season of all in my opinion. Cheers.

Nice blog!!! I love to watch this show and saw its every episode. Do you wanna watch this show ? if yes then go through the link and Watch Sailor Moon Episodes online for free. Its a best site for this show..

I am a big fan of English TV Serials. I do not miss any serial and always catch all episodes of tv serial from net. This one is really awesome show.