Kimagure Orange Road: I Want to Return to That Day 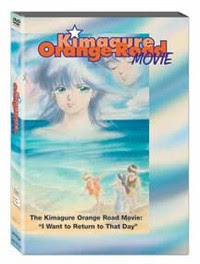 It's summer and teenager Kasuga Kyosuke is preparing for college entrance exams together with Ayukawa. Even though he secretly loves her, he is still anguishing his empty relationship with Hikaru. One day, Ayukawa becomes angry with him and sinks in slow jealousy. Unable to hide his feelings for her anymore, he finally breaks up with Hikaru. Even though she managed to get the lead role in a stage musical, he doesn't want to watch it and tells her they must break away. In the end, he and Ayukawa end together.

As many have already noticed, "I Want to Return to That Day" is a deeply dramatic and emotionally devastating movie finale to the anime series "Kimagure Orange Road", completely untypical for that humorous show. Basically, the movie is just like the show - but without all those silly jokes, unconvincing complications, clumsy solutions, stupid ideas and all other flaws that blotted the great romantic premise and reduced its quality - actually, it doesn't even mention or reference the special powers of the hero, Kasuga, at all, which also works in its favor since all those fantasy powers had their moments of inspiration, but ultimately became unnecessary in the show's last third. It is "Kimagure Orange Road" - just maturer. What we have here is a pure drama, a gentle and subtle story of Kasuga's break up with Hikaru in favor of Ayukawa, reduced to its essence and completely deprived of anything else. A lot of credit goes to the unknown but brilliant director Tomomi Mochizuki who delivered another anime pearl, a special that tops the original.

The movie impresses due to its rich nuances that capture some evasive human reactions and emotions that are otherwise rarely shown: Kasuga thinks of something and looks seriously so Hikaru wants to cheer him up by waving with her hand in front of his head and saying: "Dark, gloomy cloud, be gone!"; in a bar, Hikaru tells him that she would like to live in New York because there the people "can do 'it' publicly", showing him what she means when she mischievously hides her face with the palms of her hands and makes a 'kissing expression'; the 3 minute long take where Kasuga is talking with Ayukawa on the phone while sitting on his couch; Ayukawa awaits Kasuga, nervously turning on and off the lights in her apartment non-stop...The story is filled with unusual camera shots and many symbolical scenes that are placed throughout it, whereas the sole break up of Kasuga and Hikaru is heart breaking, one of the saddest in the anime genre. Unlike the series which had that magic in the start but lost it, the movie keeps it the whole time and fascinates with meticulous care, creating an unassuming triumph that says everything. As much as the series frustrated with the open end, so much its forgiven for opening the way for this movie jewel to finish it just the right way.