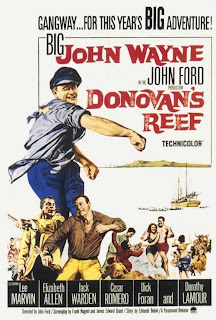 Gilhooley, a US Navy veteran, jumps from a ship and swims to a island in French Polynesia, where he still has a feud with his colleague veteran Michael "Guns" Donovan, though they both forgot over what. Also, they coincidentally celebrate their birthday on the same day. Arriving in the local saloon, Gilhooley and Donovan start a fight, but are interrupted by the doctor, Dedham. When Dedham's daughter Amelia arrives on the island from Boston since he inherited stocks from a rich company, but might lose it due to a "morality clause", Donovan pretends to be the father of his three extramarital children Leilani, Sarah and Luke. Donovan falls for Amelia, but she gets angered when she finds out the truth. Luckily, in the end they make up on Christmas and decide to get married.

The last collaboration between actor John Wayne and director John Ford as well as the latter's 3rd last film, "Donovan's Reef" is a negligible, but charming and amusing comedy that marked a fascinating departure for the director. Set in the opulent nature of French Polynesia (though it was actually filmed on Hawaii), the film is a simple comic tale about appearance and misunderstandings that flows nicely - Ford's comic timing isn't perfect, though he manages to ignite the humor even in some of his dated macho elements (the fist fighting sequence between Wayne and Lee Marvin in the bar early in the film is almost as fun as some of those Spencer-Hill comedies, with a few neat details, like the police officer who can't stand them fighting again so he slams the open beer bottle onto the bar table, causing the drink to burst out in bubbles), and especially in many pure old-school jokes (during the stage play for Christmas, Marvin is introduced as one of the three wise men - "The King of the USA"). A mild, sustained, mostly plausible fun that works surprisingly well thanks to many charming scenes and actors, while a small jewel is the stand out performance by actress Elizabeth Allen who plays Amelia with irresistible energy, especially when she is "subtly" competing with Donovan in the sequence where she beats him in swimming to the shore.