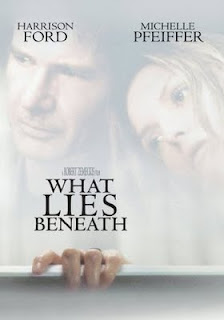 Claire wakes up from a bathtub. She dreamt of a dead woman on the bottom of the sea. But strange things continue to happen: doors open, candles turn out, on a foggy mirror letter "MEF" show up, there's a spectrum of a woman...Claire's husband, Norman, tells her she needs to go treat herself, but he is actually the cause of everything. He namely slept with a student, Mary Elisabeth Frank, and killed her, throwing her body in the sea. When Claire senses that, he tells her it was all an accident. He tranquillizes her with a medicament and puts her in a bathtub filling with water. But the ghost scares Norman who trips and thus Claire is able to run to the car. Norman follows her and the car ends in the sea with them. But the ghost catches Norman, who sinks, while Claire swims up.

How could a director of so many excellent films like Robert Zemeckis fall for such a low product in his career? Truly, without the two stars, the film would seem more like some cheap B-horror. Yet the audiences weren't so picky and flocked to the cinemas, making "What Lies Beneath" eventually the 5th most commercial film in the year 2000. The biggest problem of the film is the banal screenplay and lack of style or some creative highlights, which is why it seems like some copy of "Poltergiest" and "Sleeping with the Enemy" that reaches for cheap scares (sudden music; sudden appearance of someone; loud sounds...) equipped with explicit violence. Harrison Ford makes an interesting debut as a bad guy and is, together with Pfeiffer's performance, the best part of the flick. Some also lamented about the ending, but it's the only part of the film where Zemeckis achieved a firm grip of the story and discovered an excellent Hitchcockian strength, but it's no use by that time since 90 % of the film has already turned average.