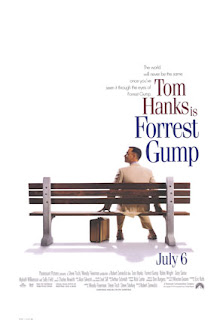 Forrest Gump is sitting on a bench at a bus stop in Georgia and narrating the story of his life to people sitting next to him: he was born in Alabama with a bellow average I.Q. of 75. Deemed retarded, he made only one friend, Jenny. As he was a fast runner, he was enlisted into college in order to run for a football team and gained a diploma. He went to the Vietnam war and lost his newly made friend "Bubba" while saving the life of Lieutenant Dan who was left crippled when he lost his legs in an explosion. Together, they accidentally made a fortune with shrimps and other investements. But all that time he didn't care about anything except for Jenny. She spent a night with him and disappeared. Back in the present, they meet again. She dies but presents him his son, Forrest Jr.

From time to time a movie shows up that contains so many emotions and humanity that it causes the audience to shiver from enchantment. "Forrest Gump" is one of those films, even though there is a large number of critics who still dismiss it as sentimental. Yet it is not: it is far too creative and too funny to be melodramatic. "Forrest Gump" is one of those films that are really needed to be made more often because they are a salve for the soul. Curiously, many are criticizing it for turning too "optimistic" and showing love for the characters—if dark movies can contain too much pessimism and negative energy, then a movie showing the exact opposite, different only in algebraic sign, should be able to get away with it, too. In its essence, the appeal lies in Forrest as a symbol for innocence, something pure, in a changing world, a touching story that doesn't observe human characters like insects, but like real human characters, while Tom Hanks gave the role of a lifetime as the title hero who never cared for money or success, but only longed for his childhood love Jenny. While her character is rather dishonest and manipulative, she still serves as the hero's yin and yang: while Forrest is optimistic and idealistic, Jenny is depressive and disenchanted, and their reconciliation at the end signals their symbolic unity of these character extremes.

The sole sequence where the 10-year old Forrest is getting chased by bullies and suddenly starts running for the first time in his life, breaking metal braces for his legs he had to wear his whole life because he couldn't walk properly, is so thoroughly magical it sends shivers down the spine. There are also many other great moments—that work as a sly and satirical take on success and the old saying "you only have to be at the right time at the right place", which becomes the hidden leitmotif of the story—such as the bravura directed sequence where the hero saves and carries a soldier in Vietnam before the whole jungle explodes, the hilarious "guest" appearances by long dead celebrities, like when Forrest meets Nixon, Kennedy or John Lennon in a TV talk show, causing him to say such words like "No religion, too?" And that the movie is actually clever shows a scene where Forrest can't sleep because of some flashlights at night in the Watergate building, so he calls the security and informs them to check it out because "some people can't find the fuse box". "Forrest Gump" is a shining film, a vivid modern fairytale and historical commentary (containing a sly message that behind every famous personality there are also many unknown "ordinary people" who helped history happen), unusual and over-the-top at many instances, yet that does not matter when such melancholy and harmony is present. The movie is a masterpiece—but if there is one footnote to make, then it is that it is very similar as some other masterpiece, the unknown, sadly forgotten forerunner revolving around a different kind of mentally handicapped hero, "Being There".