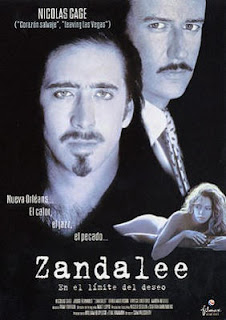 New Orleans. Zandalee is a woman married to Thierry, a former poet who is now working as a businessman. Thierry meets his old friend Johnny, a painter, at one bachelor party and persuades him to draw a portrait of him. At the same time, Zandalee is depressed by lack of intimacy and interest from her husband, so she starts an affair with Johnny. Their relationship is rough and wild, but in the end she decides to end it and admit everything to Thierry. The couple starts a second honeymoon at a lake, but Johnny shows up and Thierry falls from a boat and drowns. Zandalee gets shot by a criminal because Johnny didn't pay his debts.

"Zandalee" is a big disappointment: instead of becoming a serious, mature and intelligent erotic drama it turned out just into a sloppy soft porn. Even more bizarre is the fact that the screenplay was not written by a man but by a woman, Mari Kornhauser, who failed to give insight into the female perspective of the title heroine who is increasingly frustrated in bed. It's surprising serious actors like Nicolas Cage would star in this kind of empty nonsense, because out of an average 100 scenes displayed throughout the film there is a point to only like one of them, while in the rest 99 it's just empty babble whose point is only to keep the story going even though it doesn't have anything to show. From uninspired dialogues up to the uninspired development of story potentials, this is a truly weak film, but some of the moments are so bizarre they just have to be mentioned: in one of them, Zandalee and her husband Thierry are naked in bed and she is trying to excite him to have intercourse, but he simply can't do it for some reason. And then he goes to the window, turns his head, spots a lizard, picks it up and frees it outside: now what a neat "interruption" in the middle of a marital crisis. There are other wacky moments: out of the 5 intercourse sequences, the maddest ones were when Johnny mixes oil and cocaine and goes on to rub it on Zandalee's but (but the scene ends right there and doesn't elaborate it further) or the one when he goes on to "take her from behind" in a confession room in a church (!). Erotic doesn't have to necessarily be trash - many directors ambitiously incorporated it into a great story - but here it's just a primitive soap opera. The triangle relationship between Zandalee, Johnny and Thierry was poorly conceptualized, Steve Buscemi's small role of OPP man is completely useless, as well as some 10 other ones, the music is awful and should have been simply removed to strengthen the mood of the film, while the director lacks any kind of artistic skill. "Zandalee" is something like a ship lost in somewhere in the ocean, spinning around in circles because it doesn't know where to go.

Excellent review. Just one correction. Cage's character asked
Judges (Theirry) if he could paint
him... I thought the painting scene
was the best and most erotic.The
International version of this movie
has much more dialogue which explains the characters a little better. Overall, alot was left out
from the original script.