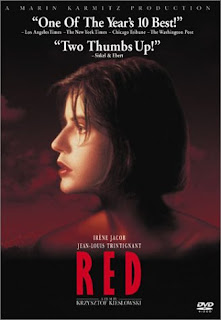 Switzerland. Valentine Dussaut is a 23 year old photo model with a good heart. Her boyfriend Michelle is temporarily in Britain, so their only contact is through the telephone. One day Valentine accidentally hits a dog and decides to take him with her. When she decides to return the dog to the owner, she is shocked to find out it's a cynical, old, retired judge who is intercepting telephone calls and conversations of his neighbors and doesn't believe in love. Although she doesn't approve that kind of behavior, Valentine can't help but to be somehow fascinated by him. The two of them become friends and soul mates. Valentine takes a ferry that sinks, but survives thanks to love.

"Three Colours: Red", the last film from Krzysztof Kieslowski's trilogy that symbolically handles the meaning of colors of the French flag/ three French revolutionary ideals (liberty, equality, fraternity), brought the author his only Oscar nominations - for best director and best screenplay. "Red" - that a lot of critics consider to be the best contribution of the trilogy - is, was and will be a supreme metaphysical, esoteric, lyrical and touching masterpiece, an unusual and fluid piece of art that defies any rules and norms in observing a spiritual "fraternity" of two different people that get along fine. Despite being an art film, "Red" is actually much more elegant, attractive and quirky than many other stiff art films because it possesses a magical musical score and a splendid visual style. The beautiful heroine Valentine is an excellent character - in one scene she tells her boyfriend Michelle, who is living abroad, over the telephone that she felt so lonely that she slept with his jacket in her bed the last night - but the one of the retired judge is also interesting, who cynically comments how strange it is that the justice once depended only on his will in court and on nothing else.

The two of them can't stand each other at first, but they slowly realize that they are fascinated by each other. They find out that they really love each other, in a perfect, but platonic way, although he is 40 years older than her, and wonder what could have been if they were born the same year. To make things even more interesting, Kieslowski added a little subplot of a young man, Auguste, who was betrayed by his girlfriend - that subplot looks as if it was retelling the event that the judge experienced when he was young and that made him cynical, except that it is told in the present time, in Valentine's neighborhood. Coincidence? Ironically, the judge indeed finally found the love of his life, Valentine, just in a different way than he expected. The story is quiet, a little episodic, and in the opening shots it didn't indicate to be anything special, but it slowly bloomed into a magical experience. Although the final point at the end isn't too clear - is love stronger than death? - it seems as if some invisible aura of magic illuminated the whole film.
Grade:++++
Posted by Marin Mandir at 7:51 PM