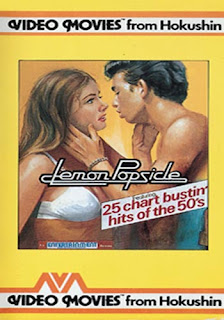 Israel, 1950s. Benny, Momo and the over weight Johnny are three teenagers in search for a girlfriend. They meet two girls and take them to the cinema, without Johnny. But since they don't have tickets they get expelled. Benny is often arguing with his parents and gets drunk at a party because the girl he loves already has a boyfriend. Selling ice cream he notices that Stella, a middle aged woman, is seducing him. She even invites him, Momo and Benny in her apartment to become intimate, but then her husband shows up and gets rid of them. The three hapless boys hire a prostitute to loose their virginity, but since they didn't use a condom they get genital parasites. Momo rejects his girlfriend when she gets pregnant and Benny pay for her abortion. But she returns to Momo.

Coming of age Comedy "Lemon Popsicle" was once one of the most famous and most successful films from Israel, being even nominated for a Golden Globe in the category for the best foreign language film, but today it doesn't have many fans left. Stiff directing (passive camera movements, fake looking situations...) and pale actors are annoying the viewers more than they are entertaining them, and the only great thing the authors did was the choice of music. Conservative viewers shouldn't be offended too much for only a couple of shy erotic sequences where nothing much was shown, but many will be confused by the nonsensical moment in which the three teenage heroes are in the apartment of the older woman Stella who suddenly starts stripping and seducing them, while they are sitting on the couch an looking in dismay, in such an embarrassing manner that one may wonder if it was all a bad hallucination. The actors were obviously embarrassed filming this sequence, since the screenwriter didn't adequately elaborate the situation or make it look meaningful or coherent. One of the better jokes is the one where Benny pierces the bicycle tire of a girl he likes, in order to take her for a ride in his own bicycle, or when the curious three teenagers have intercourse with a prostitute without a condom, just to get parasites the following days. "Lemon Popsicle" is a solid, nostalgic chronic of teenager life, with a very serious ending, but too clumsy too be anything more.