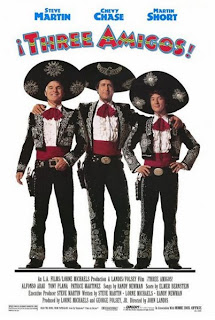 The Mexican village Santo Poco is terrorized by outlaw El Guapo, so one of it's inhabitants, Carmen, decides to hire the 'Three Amigos', actors she mistaken for real heroes when she saw one of their heroic films on the screen. She sends an incomplete telegram to them in Hollywood and they accept since they were fired by the studio, thinking it will only be a show. When El Guapo and his gang turn out to be a real outlaws, they run away, but decide to storm his were abouts anyway in order to be real heroes. They save Carmen and return to the village, where every inhabitant makes and wears their costume, scaring the outlaws away.

"Three Amigos" are a mild parody of the far better classic "The Magnificent Seven" in which the authors made even better character development of the seven protagonists there than the authors did out of the three protagonists here, resulting in a solid, harmless fun, yet thanks to director John Landis, who had the most creative phase in the 1980's, it still managed to surprise here and there with a few clever touches. It's a routine comedy without much effort put into it, but the first third is really good thanks to the irony that mocks the cheesy and naive mentality of the title protagonists who live the same way they act in their idealistic movies. One of the best gags comes up right after the three outlaws were confused by the show of the Three Amigos, running away to their boss El Guapo to lament about what they saw, making one of them complain: "They even called us scum-sucking pigs! Us!" Since the three of them look at each other, all one uglier than the other, dirty and like they haven't washed for months, that scene has some hilarious, but subtle comic timing. Even later on a few good gags show up - like when the Amigos swing on ropes into El Guapo's hideout, but Dusty slams through the window of a building and falls right into a closet that shuts right behind him, while Ned gets stuck with his shoes on a hanging pinata - yet there is a weak chemistry between the three of them, Chevy Chase seems rather absent while the story is trivialized with silly subplots, like the singing bush.