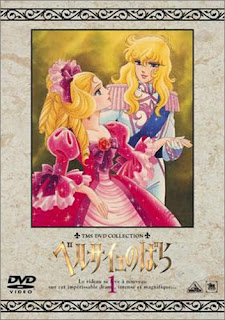 France, 1755. The 6th daughter of the family Jarjayes was born, called Oscar Francois. But since her father as a member of the royal guard eagerly wanted a son to continue his job, he decided to raise Oscar as a boy. He taught her how to fence and sent her to Versailles to protect Marie Antoinette, together with Andre, Oscar's friend since her childhood. There are is a lot of plotting in the court, from Jeanne de Valois de la Motte and Madame du Bary, the mistress of Louis XV, and Oscar also fell in love with Hans-Axel von Fersen but decided to forget about him since Antoinette already loved him. With time, Andre fell in love with Oscar, but decided not to tell anything. They went to the army and in 1789, when the French revolution started, decided to help the poor people instead of the royal family. Before Andre gets killed, Oscar realises she always loved him, and dies herself in a battle.

Like the melancholic animes "Lady Georgie", "Queen Millennia" and "Sailor Moon", "Rose of Versailles" - somewhere translated as "Lady Oscar" - also enjoys a legendary reputation and is pure nostalgia. The story in the backdrop of French revolution is sober, bitter-sweet and deprived of sweetish moments, turning sometimes even dry, but unlike other animated achievements, "Rose of Versailles" contains some kind of a motherly care for their characters, especially for the heroine Oscar who is without precedent by her androgyny in the genre: as a fictional personality, the only one in the story populated by real historical figures, she is beautiful and feminine, but at the same time also always dressed in men's clothes, acting tough and strong, which creates interesting exceptions - when she wears a dress for the first time in her life in a fancy ball, she runs away from the room all confused in her newly found female side. In another episode Andre throws her by force on bed and rips her uniform, but then he remembers she is his superior so he stops, apologises and leaves, while Oscar starts crying.

There are also nice details present (rain falling over a fountain) and the intrigues in 18th Century Versailles were reconstructed to seem like they were happening today - the subplot of the double crossing affair by Jeanne de Valois de la Motte, who dressed a prostitute as Marie Antoinette to trick cardinal Rohan into thinking that the queen likes him and bought an expensive necklace on Antoinette's account, and who was later led to a court where she said that Antoinette was a lesbian, as exaggerated as it seems, actually did happen. The sequence of Oscar and Andre's intercourse in episode 43 where in the forest at night they are surrounded by fireflies is as genius as the one in "His and Her Circumstances", while the music in episode 44 in Oscar's imagination, where she is riding together with Andre by the beach, brought the pseudo gay sensibility to the esoteric heights. Something like the anime "Rose of Versailles" probably happened just once and never again.

I love "Lady Oscar". Is one of my favorite anime series.

Do I miss those times when animes like these were shown on TV. This was one of my seminal anime shows I watched as a kid. A history lesson presnted as great entertainment.

Sorry but you've got some wrong facts about Rose of Versailles.
I am also a big fan, but I like the manga more than the anime. Well I suppose you only saw the anime but still as a true fan I have to correct you. First, Oscar didn't realize she loved Andre when he died, but a few days before that - remember the end of ep. 37?
In the ep. 29, where Andre rips her shirt (it wasn't her uniform) she is not his commander, because this happens before she beginns working for the french guards...
I think you will have to take a look again at the series before writing blog texts!

Feel free to correct, I am not all knowing, obviously, so I appreciate when bigger experts than me bring me on the right track. Since you read the manga, you probably qualify as one, since I only saw the anime.

"First, Oscar didn't realize she loved Andre when he died, but a few days before that - remember the end of ep. 37?" True, yet you were reading just my summary of the plot, not the exact, in-depth depiction of events. I compressed the ending since I did not want to write in detail about it. Still, I will make a slight change by replacing the word "When" with "Before".

"In the ep. 29, where Andre rips her shirt (it wasn't her uniform) she is not his commander, because this happens before she beginns working for the french guards..." Her shirt is also part of her uniform. Also, on Wikipedia, it says this in the article on Oscar Francois de Jarjayes: "She is the love interest of both André Grandier, her servant at the Jarjayes mansion and afterwards a soldier in her regiment..." Therefore she was always his superior, even before the segment of the French guards. That's what I meant, he was her servant and acted out of line in that scene. I will also make a little change in that paragraph in order to avoid confusion.