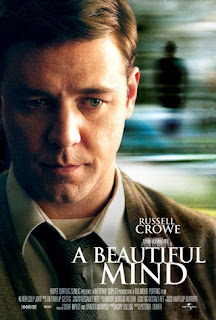 In 1940s the unusual John Nash gets a scholarship for mathematics at Princeton University, but most of the students simply avoid him. Only his roommate Charles becomes his friend, while some CIA agent, Parcher, asks him for help in deciphering secret codes. After success and a marriage for Alicia, John discovers that Parcher and Charles are not real people, but just his hallucinations since he is suffering from schizophrenia. He decides to take medicament and to cope with his everyday psychosis. In 1990s he gets the Nobel Memorial Prize in Economics.

When the biographical drama "A Beautiful Mind" won 4 Golden Globes, 4 Oscars (including in the category best picture) and 2 BAFTAs, it automatically became hated by the part of the critics and proclaimed a "spoiled star", but it's still undoubtedly a good film, while the fact that those awards seemingly like only sappy stories about mentally handicapped people who succeed in life seems rather irrelevant. But the relevant problem of the "Beautiful Mind" lies in the idealization of the hero John Nash at one part, and in standard Hollywood sugary direction at the other, but the story has its moments (the clumsy Nash says to a blond woman: "I find you very attractive. Your aggressive moves toward me indicate that you feel the same way. But still, ritual requires that we go through a number of platonic activities before we have intercourse. I'm simply proceeding with those activities. But in point of actual fact, all I really want to do is have intercourse with you as soon as possible" after which she slaps him), especially when in the other half of the film some characters turn out to be just Nash's hallucinations caused by schizophrenia. A brave move from the authors, and the movie is honestly touching, but the whole thing could have been more skillful and sharp, since the end turns into a soap opera. Then not only the title would have been beautiful.