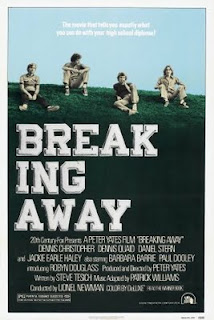 Bloomington, Indiana. Dave, Mike, Cyril and Moocher are four teenage friends who have finished high school and don't know what to do with their boring lives, trapped in province. The college students taunt them, calling them "Cutters", because their parents were stone cutters. Having no better role model, Dave becomes fascinated with Italians and bicycles. When he meets a student, Katherine, he even introduces himself as an Italian. When a bicycle race is announced, Dave trains hard and participates against the college kids. Despite difficulties, he wins the 1st prize.

A gentle-melancholic 'slice-of-life' teenage tragicomedy,  "Breaking Away" is today a rather forgotten film, but it is still wonderful and features at least two immortal quotes that will always say something about life, no matter how little viewers knows about it: the first one is when the four friends are walking through the nature and one of them suddenly says: "It was somewhere around here...(stops) It was precisely here where I lost all interest in life". The second one is when Mike laments how there's nothing going on in his life and how he is afraid that "it will be wasted", upon which his pal Cyril adds: "I thought that was our plan: to waste the rest of our lives together". There are many great lines in the story, but in those two particularly the viewers can feel the characters' deep sadness of living 'under your possibilities' through the prism of uplifting humor.

The whole film is full of easily identifiable moments and Paul Dooley's comic role of Dave's crazy dad is a delight, whereas the bicycle race in the finale is a tour-de-force example of rhythm, despite the predictable ending: obviously, just like in "Tom & Jerry", the viewers always slide towards the side of the weaker one, the "underdog", hoping he/she will beat the snobbish favorite, and the same goes for that finale where everyone cheers for Dave to win against the college brats, but since it was one of the earlier examples, it seems fresh. The movie is not flawless, though: it is comprised out of small vignettes of life and thus seems over-crammed, episodic and unexciting, Daniel Stern's character of Cyril seems more like an extra than a really strong character, the story is somehow colloid while some jokes are rather too mild. Still, director Peter Yates crafts a really wonderful small film that has inspiration and gives inspiration.