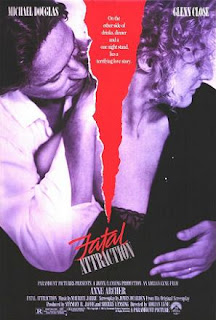 Dan Gallagher is a successful lawyer and has everything in life: a luxurious apartment, good job, wife Beth, daughter Ellen and a dog. He goes out to parties with his friends, where he meets the mysterious Alex. When his wife and child take a trip outside town for a weekend in order to search for a house, Dan meets Alex again and invites her for dinner. Soon, the two of them start a passionate affair, but Dan still leaves her since he is married. But Alex starts bugging him with phone calls and tells him she is pregnant. When she kills their rabbit and kidnaps their daughter for a while, Dan admits everything to Beth and calls the police. Alex storms into their house and attacks Beth with a knife, so Dan kills her in self-defence.

During its premiere, "Fatal Attraction" stirred up quite a hype and shocked the audience with scenes of intercourse which were unusually free for Hollywood. Ironically, in comparison to some other films shot today, these "scandalous" scenes seem timid - they consist only out of two minimalistic erotic moments (in kitchen and elevator) - but the movie is still memorable much more for its "ordinary" story about a possessive partner who doesn't want to let go of the other, even causing some to find hidden AIDS symbolism in it (Glenn Close's character Alex is actually an allegory for that virus that, after an careless, will affair, bugs the hero and threatens him with death), which is why its audacity was rewarded with 6 nominations for an Oscar, 4 nominations for a Golden Globe and one BAFTA for best editing. The first half functions brilliantly thanks to quiet details and observations (for instance, Alex is a victim of loneliness and even cuts her veins) but the second one, in form of a thriller, causes a clumsy negation of all the events previously seen, mostly thanks to the banal end - Alex simply can't be the aggressor in the story, but the producers unfortunately played it safe and crafted the 'neat' ending it got.