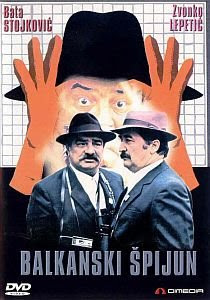 Belgrade. Ilija Čvorović, a middle-aged man with a heart disease who spent two years in jail for Stalinism during his youth, gets summoned from authorities for a routine conversation involving informations about his tenant Petar, a tailor who worked in Paris, in a Capitalistic state. The police inspector doesn't discover anything unusual and forgets the case as fast as it has been brought up, but Ilija becomes paranoid and decides to spy on the innocent Petar. From his vague gestures, he "concludes" that Petar is a terrorist who wants to destroy the country, so he and his brother Đuro capture him and his friends, all respectable professors, torturing them. The completely confused Petar manages to escape from the house because Ilija gets a heart attack.

"Balkan Spy" is the last of the 'great three' films involving screenwriter Dušan Kovačević and actor Danilo 'Bata' Stojković, who here probably gave the performance of his career. Satirical humor, satirical characters, satirical fake danger and satirical drama are all attributes of this unusual tragicomedy that should definitely be compared with the brilliant satire "Being There" since it displays a similar, endemic theme, the one about human superficiality and the power of suggestion that allures them to "perceive" something that is not there. The same way the characters in that film think the retarded Chancey is a genius, the same way Ilija and his family here think that their innocent neighbor Petar is a terrorist, interpreting everything that can be interpreted in two ways, only in their way.

That resulted in burlesque situations of their hilarious paranoia (Petar and his friends, the Academics, are on the shore of a river, pointing at something with their finger, while Ilija is observing them from the distance and immediately "deciphers" and draws with arrows the plan of their "attack" on the city; Đuro captures the respectable and confused Academics and ties them up in his basement, beating them up, demanding from them to "admit their crimes"; the room illuminated in red as a symbol for Communist oppression...) that are not for everyone's taste due to pretentiousness and bitterness, but since writer Kovačević is simply one satirical genius who juggles with clever symbolism (the opening interrogation sequence implies the democratization of the Yugoslav regime in the 80s, since previously any suspect would have been simply incarcarated without trial), then even his cult "Spy" is interesting, once again becoming sadly visionary and too close for comfort in the future, especially due to parallels in history where numerous countries looked for 'invisible enemies' among their ranks. At the latest during the scene where Ilija uncovers a giant photo of Stalin, his "role model", does "Balkan Spy" become a giant, fantastic, megalomanic satire on the psychological illness called "Stalinism", whereas the final scene is one of those great examples of "interrupted endings", in which Ilija is walking on his fours together with his dog, unforgettably implying how a human without reason is reduced to an animal.