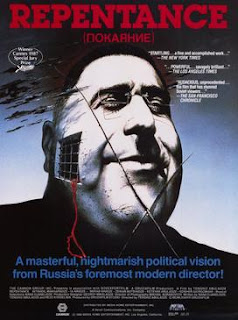 A small Georgian town. Ketevan, a pastry girl, hears that the autocratic ex-mayor of the city, Varlam, has died. After the funeral, people are shocked that his corpse keeps showing up, leaning on to a wall. The perpetrator is found out to be Ketevan, who keeps digging up Varlam's corpse, claiming he does not deserve to rest in peace. She tell her story at the court: as a young girl, Ketevan, and her parents, artist Sandro and Nino, witnessed how Varlam became the new mayor. Sandro begged Varlam not to destroy an old church, claiming it is a cultural heritage. Varlam showed up at Sandro's home and performed for him. Later on, though, Sandro was arrested and charged with being the "enemy of the people". Varlam's subordinates kept arresting scores of innocent people, always searching for new invisible enemies. Finally, after pestering the authorities about Sandro's fate, Nino was arrested and disappeared as well. Back in present, Abel does not want to accept that his father, Varlam, was a criminal. However, his child, Tornike, accepts that and commits suicide. Shocked, Abel digs up Varlam's corpse himself, and throws it down a cliff.

One of the unknown classics of cinema, Tengiz Abuladze's excellent satire is a colossal allegory on Stalinism, appearing during 'Perestroika', a time when the Soviet Union was cutting all ties with its inconvenient Stalinist past, yet the film still seems remarkably fresh, relevant and potent even today, since it achieved that desired timeless feel. Already from the opening scene in which a man in a brown uniform takes a piece of cake in the shape of a church and eats it, one gets the impression that "Repentance" is not your 'run-of-the-mill' art-film: Abuladze jokes around with several surreal images and ideas (for instance, even though it plays out in the present, all the guards of the authorities wear a knight's armour, symbolizing their medieval methods of oppression; during an interrogation sequence, a woman in a white robe playing a piano suddenly puts a blindfold and holds a balance and a sword, mimicking Lady Justice), yet they all have a point, a meaning and lead to a conclusion near the end. Varlam, even though he is modeled after Stalin and Lavrentiy Beria, is the symbol for all the monstrous dictators that have plagued humanity throughout history: "Repentance" is thus one giant commentary on the mental disease that is Totalitarianism, but through it, implicitly, also on sheer egoism, a state where people in power cannot admit that they are wrong, and thus everyone who is not of their opinion is predictably eliminated.

Abuldaze crafts the character of Varlam surprisingly subtle: near the beginning, Varlam is almost charming and seems to listen to Sandro, yet his threatening persona is all the more palpable when the artist suddenly gets arrested and Varlam holds a revealing speech: "It's hard to catch a black cat in a dark room - especially if it is not there. But we will catch the cat in the dark room, even if it's not there". The interrogation sequence involving Sandro has some genius quotes ("What good can the persecution of the innocent do for the common cause?" - "There's irrefutable proof that every "innocent" one is the enemy of the people.") and the absurdity is even done to the tenth of power when Mikhail "admits" that he was "digging a tunnel from London to Bombay", yet such laughter quickly turns very bitter when they both get convicted, anyway. Kovačević's "Balkan Spy" could go in the double-bill with "Repentance", since they both cover the same topic of the insanity and paranoia of Stalinists. The storyline is set up economically, simple, yet its 'invisible' style is still sharp: Varlam is a symbol for the criminal past, Abel for the present denial and teenager Tornike for the future generation which, ironically, has no future as long as it does not throw away its burden, admit its mistake and finally grow out of this atavism.