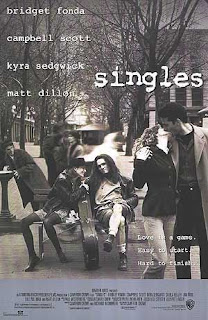 Seattle. The young Linda just bought a house and became independent, but also a single. Accidentally, she meets some Spanish man with whom she starts a relationship, but he breaks her heart. Thus she is at first repulsive when she meets the charming Steve who flirts with her, but still starts a relationship with him. At the same time, in Steve's neighborhood, Janet's life and her relationship with rocker Cliff is in a crisis, while Debbie tries to meet the love of her life through an agency with video recordings. Both Linda and Janet break up with their boyfriends, but eventually renew them.

Shining comedy "Singles" isn't an ordinary film. Besides the fact that director Cameron Crowe showed an admirable talent in the funny story, that reminds a little bit of Wilder and Allen, he also, with an easy hand, managed to capture the perfect description of independence of the young generation and a sense for their sensibility. Unpretentious, miraculously simple, alive, crazy, slightly daft, this film in it's portrait of finding love is as sweet as the first kiss, whereas it has a whole bunch of subplots with spirit (for instance, after Janet (fantastic Bridget Fonda) asks her lover Cliff: "Are my breasts too small for you?" and he replies with: "...Sometimes", she decides to undergo a plastic surgery and enlarge her bust) and foolish jokes (in a matchmaking agency Debbie hires a weird director and films a "video for presentation" in which she is shown under shower and then flying above Seattle) while it isn't even ashamed of a few sympathetic failed scenes. "Singles" are a small forgotten masterpiece, a simple slice of life story revolving around imperfect heroes with heart in which the best role has been achieved by Bridget Fonda as the insecure Janet, whose name gets written on the table by hundreds of rose petals by her lover in just one of a bunch of charming scenes. There are a lot of interesting things in the world, but it's always nice to see a movie that shows how humans beings can still the most interesting of all miracles.