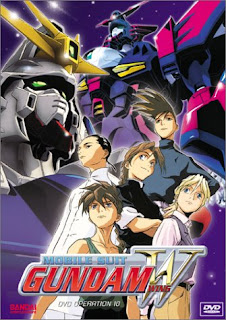 In the future, man kind builds outposts in space stations, the so called colonies. But people from Earth send an army in order to put them under their rule. In order to defend themselves, the colonies send Gundam robots on Earth, that are piloted by children Heero, Quatre, Duo, Trowa and Chang. There is also the evil organization Oz in which General Septem, Zechs, Hilde and Lady Une are especially notorious: they sabotage every peace talks between Earth and the colonies with terror. Heero enlists into a school and meets a girl, Relena. In the end, Gundam robots defeat Oz and establish peace.

The viewers will quickly become tired from this, unfortunately, only sufficient anime action science-fiction mecha series called "Gundam W", a remake of the popular show from the 1980's. All characters are animated in a very detailed way, but there is no chemistry between them, while the robots seem as if they came from the "Power Rangers". True, it's interesting to watch them fight with other mechanical monsters across such exotic locations like the Middle East or Africa, but the action is mostly inert whereas the biggest drag are dry and lifeless political and intrigue dialogues by General Septem, Zechs, Lady Une and others. Such retention of charm is horrible and really drains every joy from the story. The boy Heero is suppose to be a hero, like his name "hints", but the episode in which he uses his robot and accidentally destroys the plane with the chief pacifist in it who was suppose to bring peace, reveals him as that what he is - a murderer. There are some good points in this anime, yet everything is full of banality (Une throws a traitor from the flying plane - and then even shoots him in the air, just in case!) and the 49 episodes really seem overlong.