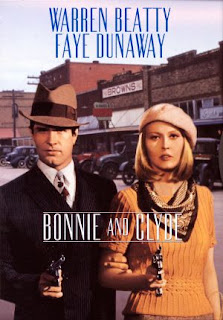 In '31 the rebellious waitress Bonnie spots criminal Clyde from her window, while he is trying to steal a car. Very quickly she joins him and they become robbers, although in the very first bank they don't find anything since it went bankrupt. In a gas station, they meet mechanic Moss who also joins them, as well as Clyde's brother Buck and his wife Blanche. The five of them robs banks throughout America and hides in various hotels. After they reached notorious status, Buck gets killed in a police ambush, while Blanche gets arrested, thus forcing Bonnie and Clyde to hide in Moss' house. In '34 the police shoots down and kills Bonnie and Clyde on a field.

With this masterful crime ballade director Arthur Penn reconstructed the life of the notorious couple that could have easily been called 'the criminal Romeo and Juliet', breaking a lot of taboos for the 1960's and opening a new path for "New Hollywood", not caring if the movie is directed in an uneven way as long as it's unusual: "Bonnie and Clyde" were thus nominated for 7 Golden Globes, including best picture and director, won 2 Oscars (supporting actress Estelle Parsons, cinematography) and 2 BAFTA awards (most promising newcomers Faye Dunaway and Michael J. Pollard). Penn and screenwriters Newman, Benton and Towne slightly sympathize for the criminal duo and the direction isn't as strong as the juicy written screenplay, but it finds just the right measure in their lives that end tragically - thus the last sequence is shot in slow motion. Clyde (great Warren Beatty) is truly an unusual antihero - he cut off his two toes so that he wouldn't have to work, and when Bonnie starts passionately kissing him after he stole the car, he stops her in a gentleman way because he has "good manners", implying he had troubles with impotence. Comedian Gene Wilder has a small cameo somewhere in the middle of the film as the victim whose car has been stolen, while Gene Hackman is hilarious in the scene where he makes grimaces while Bonnie reads about an ugly woman. Bizarre, chaotic, restless, messy and totally wild, this is a movie that isn't for everyones taste, and was thus panned by the critics in 1967, but one has to respect the authors for bravely trying to break with every single conventional rule that made the cinema so stiff before.