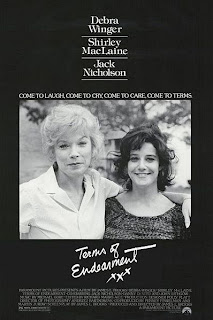 The story follows 30 years of one suburban family: Aurora is a rebellious woman who gets a daughter, Emma. When Emma grows up, she marries the teacher Flap and leaves Aurora all alone, since her husband died. When Emma gets three children, Aurora isn't very happy with her role as grandmother and starts a relationship with a neighbor Garrett, a former astronaut. Emma then divorces Flap and goes to live with her, but gets cancer and dies. Aurora is left alone.

As he did with numerous movies after this one, director James L. Brooks proved with "Terms of Endearment" that sometimes family moments can be more fierce than some crime films. That excellent, truly tight quality humorous drama is a very emotionally gripping piece of cinema, much more clever than some critics who dismissed it as a soap opera would like to admit it since it's an eccentric and very unusual film. It's not magnificent, nor glamorous or "cool", but on the contrary, very realistic, down to earth, dirty and funny. James L. Brooks is, sadly, little known among the directors of his generation, but he always showed an admiring trend of humanity and sympathy for losers in his films, and one of the reasons why "Terms" are so appealing is the fact that everyone can identify himself or herself with imperfect characters on the screen. For it's time, the film contains some unusual descriptions: intercourse with a pregnant woman; Aurora hears Garrett (excellent Jack Nicholson in a refreshingly fragile performance) humorously shrieking and howling while taking a cold shower in his home; Aurora slaps one of Emma's little sons who incorrectly complained about his (sick) mother. A very refreshing and still touching drama about life and compassion.