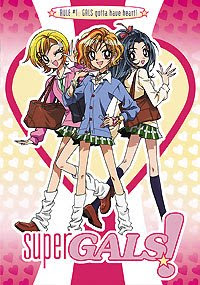 Tokyo, Shibuya. Ran Kotobuki is a hyper dynamic teenage girl with a red streak on her orange hair. She is one of the so called 'kogals' and aspires to become the "world's greatest gal". She lives in a family obsessed with police - all her ancestors were police officers, and now even her mother, father and brother Yamato work in the police department, while her younger sister Sayo also aspires to join them. In school, she always tries to leave a dashing impression but finds a boyfriend, Tatsuki. Ran becomes friends with the blond Miyu and Aya, whom she talks out of going out on dates for money. The three of them go through various adventures, like fighting with Ran's rival Mami, while Aya falls in love with Yamato.

Amusing anime series "Super Gals!" is a solid, unusual teenage slice-of-life shoujo story that's sweet and bitter at the same time. It can be described as a 'Magical girl' show without fantasy elements, but with a lot of magic coming from it's imagination, spirit and wit, even though it only follows ordinary, everyday lives of three teenage girls. Most of it's charm is hard to explain since it only works when the viewers actually witness it firsthand, while it's detached when expressed in words: for instance, how can one explain the sensation of shrillness in the caricature opening titles of the episodes where three main girls play ping pong using the 'evil' girls as balls whose legs spin on the screen while Ran makes a salto with her body? The whole story is filled with small little gags, like when some girls comments how red streak in hair means that a girl has a boyfriend, while Ran comments how one girl should just then simply wear a blue streak; or when Ran jumps and uses her legs to remove the three 'evil' girls who surrounded and gossiped a girl.

When a teacher orders her to run 40 laps, she deliberately demands for 50, while her father, a police officer, contains her in a room and persuades her to finally decide to become a police officer herself, slyly stating again and again: "Say it! Go on, say it! You won't leave until you say it! Say that you'll become a police officer!" while the camera perfectly pans her annoyed face. That's precisely why Ran is so fascinating: she is irresistibly cute and full of energy, yet also has a very moral side to her. There is no real place for aversion because the 52 episodes combine humor (and even parody, since in one scene a superhero from a movie wears boxer shorts) and serious drama (Ran persuades her friend Aya to stop dating for money), using a sweet tone to hide subversive and bitter elements from adolescence. But on the other hand, some have complained that the anime suffers from too much kitsch, filler episodes and childish touch, even though the author Mihona Fujii neatly covered up the "nonexistent" plot.