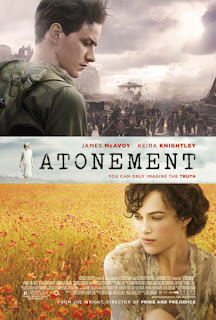 England, '35. Briony Tallis, a 13-year old girl from an upper-class family, finishes her play. Her sister Cecillia is one day angered when Robbie, the son of their housekeeper, accidentally breaks a part of her vase and she plunges into the fountain to get it. Robbie decides to send her a letter of apology, but accidentally sends a wrong one with lascivious language, which Briony reads. Still, Cecillia falls for him and they are caught by Briony in the library. With prejudice that Robbie is a pervert, Briony wrongfully accuses him of raping the young Lola. He is arrested and sent to fight in the World War II. The 18-year old Cecilia finds him and Cecillia and apologizes to them, stating that another man raped Lola. As a 77-year old, Briony gives an interview about her latest novel, the autobiographical "Atonement", telling how Robbie actually died in the war.

Winner of a BAFTA and a Golden Globe as best motion picture, this smooth adaptation of Ian McEwans critically acclaimed novel with the same title is an interesting film about unrequited love and prejudice, that is excellent in the first half, but somehow weaker in the second, ending inconveniently with an unsatisfying, impartial finish with a stiff plot twist, which will cause some to regard it paler than it is since the last thing the viewer sees in the film is the one that is often remembered the most. Director Joe Wright crafts the film in a very measured way, incorporating a few neat tricks - for instance, in order to emphasize that Cecillia and Robbie are living in different worlds, he places a scene where she plunges into the lake, immediately followed by the shot of him emerging from the water in his bath tub - and showing a sense for very emotional narration, culminating in one very memorable scene where the 13-year old Briony accidentally catches Cecillia and Robbie at intercourse in the library, and then sitting at the table facing him directly, much to his shame, which has an enormous impact since it shows how sexual content can have a strong effect on the confused young people. The second part, thankfully, didn't drag with World War II cliches since it doesn't show the battlefield, yet it somehow seems lost and uneven, which is unfortunate since the film stands "only" as very good, instead of excellent, since it had a lot of things going for it, but also some against it.