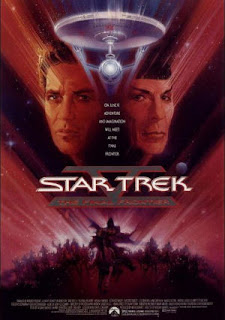 23rd century. Spiritualist Sybok attracts followers on his planet Nimbus III relieving them from pain. With their assistance, he storms into a desert city and takes famous people as hostages. Admiral Kirk, Mr. Spock and Dr. McCoy and thus called to end their vacation in nature and quickly bring back order on Nimbus III. But once there, Sybok gets them in a trap and goes with them to Enterprise: he is namely convinced that God lives in the center of the Galaxy, and thus orders them to go find him. Spock also discovers Sybok is his half-brother. The spaceship crosses the barrier and arrives at a blue planet. But they don't find God, just some alien with a face cowered in neon light who kills Sybok. The crew leaves the planet.

One of the weakest contributions to the "Star Trek" film series has some kind of stimulative touch, but the problem is that it more just allures the viewers to have a quick peak, than to watch the whole story till the end. "The Final Frontier" grossed only 55 million $ at the US box office whereas William Shatner didn't manage to convince in the position of the director like his colleague Leonard Nimoy in the previous film did, but as a whole the movie is not completely bad. The start seems promising since it shows how Kirk, Spock and McCoy and taking a vacation in nature - the sharp eared Spock is once again the best in scenes in which he claims that the song "Row your boat" is illogical while his friends wonder if he can tolerate beans and Whisky. But the main plot revolving around the search for God in the middle of the Galaxy is pretentious, convoluted, confusing and disappointing - in the end, they only find some surreal alien there, which was probably aimed as a critical view at some religious dogmas and fanatics, but seems heavily blatant. If anything, Shatner at least tried to make an interesting story about the relationship between humans and universe, but his problem is that the thematically very similar "Devil's Due", the "Star Trek: The Next Generation" episode, surpasses it by one giant leap, with ease.