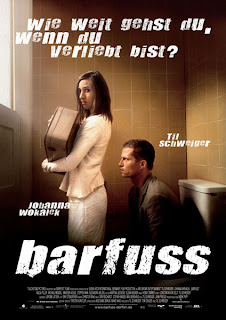 Nick is a hapless man who finally finds a job as a janitor in a mental asylum. He gets fired as soon as he starts, but before he still manages to save the life of the barefoot patient Leila who tried to hang herself. Grateful, she secretly follows him to his apartment. At first, he is annoyed by her presence, especially since she never wants to leave him, but decides to take her on his trip to the wedding of his rich brother Viktor. They steal a car, then demolish and sell it until they somehow manage to get to the wedding, where Leila gets a panic attack and Nick gets into an argument with his dad. Leila gets sent back to the asylum and Nick falls in love with her, turning himself as a patient to be with her.

This romantic version of "Rain Man" is a solid film without style that builds it's whole charm on the story of a girl from a mental asylum, Leila, who falls in love with the main protagonist, Nick, and follows him where ever he goes, never leaving him. The premise of the film is so appealing and stimulative that you can't help but to enjoy "crunching" it down in your mind, yet the execution is, as is mostly the case, inert, stiff and sterile, never managing to meet it's quality on the same level as some would have wanted. The yellow, anemic cinematography typical for European cinema once again crushes the film, while Til Schweiger is more capable as the actor than as director. Here and there the sweet premise starts to roll - like in the scene where Leila (irresistibly cute Johanna Wokalek) follows Nick to his apartment, until he slams the door in front of her - but then stops in a dead end. Sadly, the humorous situations are scarce (the best is probably where a man mistakes the naive Leila as a prostitute, gets her into his car and then asks her to "give him a blow job" - but she takes that literally and just presses her lips and blows in front of herself, making him wonder if she is joking) while the cliches and ridiculous plot devices are abundant, sometimes even painful to watch. This could have been a great film with a little more care, instead of just an interesting road movie.