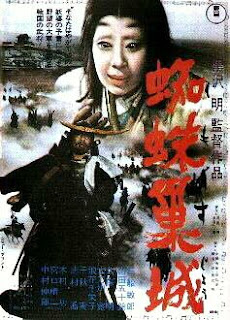 In the medieval Japan there are numerous fights led over one hidden fortress in the "Spider woods", kumonosu. Samurai warriors Taketori Washizu and Miki are returning to their Lord after a successful victory of an enemy, but meet a ghost that makes a prophecy - Washizu will become ruler of the first fortress, but Miki's son will replace him. The ghost disappears, but it's words still remain long in the thoughts of Washizu who, although happy with his high ranking position, is afraid he won't be betrayed by the Lord. His wife persuades him to kill the Lord and take his position. The first part of the prophecy came true. But when Washizu kills Miki, his son becomes an ally of the son of the murdered Lord. They use trees as mobile shields and the army kills Washizu from fear.

Very good drama "Throne of Blood" covering the universal theme of machination and turmoil set in the Samurai era was once described by the actor Toshiro Mifune as "the best film he ever made with Akira Kurosawa". Although static and "limited" by a black and white cinematography, the content, based loosely on Shakespeare's "Macbeth", offers a simple and strong allusion about greed for power and success that in the end results in a tragedy, and of course there is nobody to blame since that feeling is invisible. Kurosawa never tires with pathos, but instead uses ordinary dialogues, Japanese mentality and subtle atmosphere to intrigue the viewer in this slightly overstretched classic whose encroachment in for his untypical mystique (the appearance of a ghost, just as it was in "Rashomon") serves as an interesting addition.