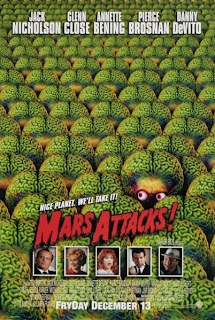 One day, UFOs start landing on Earth, inhabited by green Martians who have a strange urge for destruction. At first, the American president calms the people, persuaded by Professor Kessler that they must be peaceful because they are highly advanced. Yet, they turn out to be quite the opposite - the Martians start destroying the Earth, while most human weapons are useless. They even kill the president. But teenager Richie discovers they have a weakness: their brains explode if someone plays high-pitched music. That's how the Earth gets saved.

This cult achievement by Tim Burton is one of his better films, at moments a contagiously fun over-the-top sci-fi satire full of cynicism and irony, staying at the same time faithful to the trashy tone of the US alien comics and B-movies it was inspired by. The shrill screenplay by Jonathan Gems allured Burton to take a more colorful approach, crafting a fun parody with an enormous ensemble cast that features half of Hollywood: from Danny DeVito, Pam Grier, the hilarious Martin Short up to the especially prominent Pierce Brosnan in the role of the incredibly caricature scientist with a pipe. Some gags of the Martian destruction are brilliant - they carve their alien faces of Mount Rushmore, can't figure out the meaning of Playboy, use a 50 foot tall robot to chase after a car - while some are rather dumb and cheesy - for instance, the way they put the head of Sarah Jessica Parker's character on a dog - creating an uneven episodic story with too many characters, but fluent and sharply satirical, especially in the ironic "weapon" that shows the weak spot of the Martians, while the set design and the surreal tone are top notch in this funny version of "Independence Day".