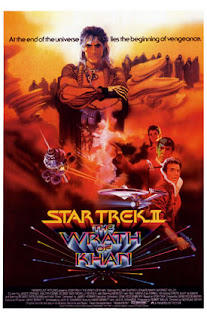 Captain Kirk, Mr. Spock and the crew got the assignment to be inspectors at a test flight of a young and inexperienced crew. But their spaceship gets attacked by Kirk's old enemy Khan who escaped from planet Ceti Alpha VI and now tries to steal the miraculous new device called "Genesis" whose explosions can create new life on dead planets. Even Kirk's wife and son have been working on the "Genesis" project. The two ships attack each other and cause damage to both, so Khan activates "Genesis". Enterprise is barely able to save itself and get away from the explosion when Mr. Spock dies while repairing the reactor in the engine room.

There is an interesting point of trivia tied with "Star Trek II: The Wrath of Khan": with an incredibly high average grade of 7.9/10 on the movie review website Rotten Tomatoes, there dominates the consensus that it is by far best and most ambitious film of that cult SF movie serial. Still, that is a little bit exaggerated: the 2nd part is better than the 1st, 3rd and 5th, but the 6th and the very funny 4th part are equally as good, if not even better. In this tight and dark sequel director Nicholas Meyer showed skill in juggling with dynamics, dramaturgy and interesting angles in space, and made a clever choice of reaching out to to take something from the original "Star Trek" TV show stockpile, the villain Khan from episode "Sleeping Tiger", which gave the whole storyline continuity and fluency. Ricardo Montalban does a very good job of reprising Khan, though a little more spice and interaction between his character and Kirk would have been welcomed.

Especially well conceived is the exposition in which the attack of Klingons on the spaceship by commander Saavik turns out to be just a test in the simulation room, but the best part is Kirk's clever trick: knowing that Khan is secretly tapping his conversation on the isolated station on planetoid Regula that develops the "Genesis" project, he stages a fake conversation with Mr. Spock whom he orders to leave with the Enterprise if he doesn't report back in one hour. And he doesn't, upon which Khan concludes that he must be trapped inside the planetoid. But after 2 hours, Kirk and his crew get teleported back - because he lied. Though slightly dry, filled with pulp (the sand worms are trashy) and some omissions (how could a space station of such importance as the Genesis be left so vulnerable and without any defence? The scene where Kirk's crew from the Enterprise shuts down the shields on Khan's spaceship is not plausible...), the film works well also thanks to the surprisingly tragic ending.