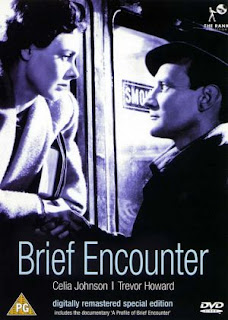 Laura Jesson returns home to her husband with whom she has a son and a daughter, but thinks about the events that occurred recently: on a train station some dust fell into her eye, so a kind doctor named Alec Harvey helped her. Later on, she met him again in a restaurant and went to the cinema with him. He told her he is married, but that he fell in love with her. They started meeting together every Thursday and led a secret relationship. Laura had the biggest difficulties since she always had to make excuses to leave her home, until she decided to end her affair. Alec went to work in Africa.

This unknown film from David Lean's opus, the director of such epics like "Lawrence of Arabia" and "Bridge on the River Kwai", is a deeply gentle, simple romantic drama about unrequited love that avoids the glamour and spectacle of the above mentioned films. Even though the calm mood made the story very tranquil, Lean still proves to have a skillful calligraphy: in the exposition, the main heroine Laura (Celia Johnson) is irritated by the blabbing of a friend in front of her, so she leads this monologue in her head: "I wish you were a wise friend...I wish you'd shut up! I wish you were dead. Oh no, that was mean". It's a pretty harsh and direct tragedy with dialogues like "Nothing lasts. Neither luck nor sorrow" and a precise, sophisticated and delicate rhythm that carefully build the emotional structure around it, equipped even with a few seminal moments (Laura imagining that she is with Alec in Paris, in Venice or on the beach). Too bad the ending doesn't bring any kind of revolution or resolution in their lives, but maybe that was part of the point the authors wanted to make: namely that sometimes people just have to live their ordinary lives and not change no matter how something extraordinary hits them.
Grade:+++
Posted by Marin Mandir at 1:22 PM