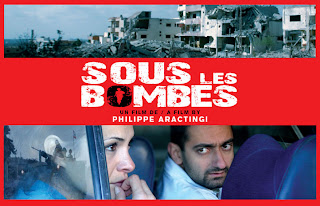 During the Israeli-Lebanon war in 2006, Zeina flies from Dubai to Beirut in order to search for her sister and her 16-year old son Karim. She persuades a taxi driver, Tony, to drive her to the south of Lebanon, where the Israel's bombardment is the heaviest. She finds her sister died in one town, so she goes to search for Karim. On their journey, they meet numerous victims of the war. Tony brings her to the house of his relatives, from where they go by foot to a monastery where Karim is supposed to be. But they only find a boy who took Karim's jacket - Karim namely died under the bombs.

You really have to hand it to director Philippe Aractingi for his part fiction-part documentary film "Under the Bombs" - unlike other directors who make films about wars that are long over, he actually took a camera, few actors and completely spontaneously went on to make a film about a war that was still going on at that time, the 2006 Lebanon War. As the epilogue states, this film shows the innocent victims of war, normal citizens who didn't score political points but just lost their beloved ones. Through a simple story about a woman, Zeina (excellent Nada Abou Farhat), who persuades a taxi driver to drive her to the south of Lebanon, numerous real victims show up and mirror the message, while some on the scene improvisations give it a special spark, like when the taxi has to stop and take a different road because a bridge is destroyed. As a whole, the movie is slightly relaying too much on it's one-note concept and seems rather monotone at times, but it can't be denied that it's never pro one or pro other side, just pro peace, while it also captured the authentic atmosphere of the mood there, like when Hezbollah supporters are participating at a funeral and chant "America is the greatest Satan", much to Zeina's dismay who later on confesses to the driver that she didn't want to raise her child in this culture of hate. For showing both sides of the story, the author deserves praise, even though his quick spontaneous writing of the story in making seemed rushed at times.