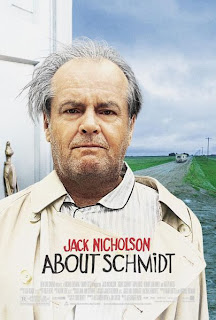 Warren Schmidt (66) is sent to retirement after he dedicated his entire life to working in an insurance company. When his wife dies during vacuum cleaning, he realizes that his life doesn't have any meaning no more. He decides to sponsor a child in Africa and take a journey in his recreational vehicle without a destination. In Colorado, he decides to stop his daughter Jeannie marrying the lunatic Randall, but fails. He returns to his home disappointed, but then gets a drawing of the African child who shows them happy together, holding hands.

After inventive and dynamic direction in "Election", Alexander Payne decided to take a minimalistic approach in the touching elegy "About Schmidt". The Golden Globe for best screenplay is slightly disputable since the story is thin and too suggestive, but the one that went to Jack Nicholson as best actor is more plausible - Nicholson won 6 Globes in total in his career, of which at least two are disputable, but here he returned back to his old form as an independent actor, after his self righteous hamming became annoying in his more recent mainstream films. Here he plays a pensioner in a refreshingly gentle way who realizes that everything he does in meaningless, that he can't change anything and that nobody will even remember his existence a few years after he dies. The story has a few comical details (the cake shaped as a building; Schmidt writes a letter to his sponsored child in Africa in which he sums up how he was replaced by an idiot in his company and calls his wife a witch because she forces him to piss in a sitting position) but always remains the bitter tone and deeply emotional impact, even though it's road movie format is slightly vague and lost. But one gag is absolutely brilliantly hilarious, namely the scene in which the undertaker explains Schmidt that the coffin for his deceased wife will cost 2.700 $ and the transportation by car 500 $, upon which he maniacally asks him: "...And what if I drive?"