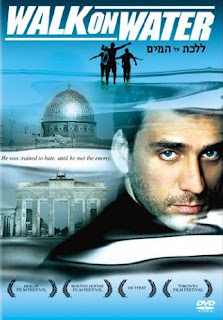 Istanbul. Eyal, a Mossad agent, kills a suspected Arab terrorist in front of his wife and kid. Back home, he is saddened to find out his wife committed suicide. His superior Menachem gives him his next assignment: a gay lad from Berlin, Axel Himmelman, is about to visit his sister Pia in a kibbutz, and he should play their tourist guide and become their friend in order to find their grandfather, an former Nazi who is now over 90. Even though slightly annoyed, Eyal becomes their friend and shows them the sights of Israel. He goes to visit Axel in Berlin and attends the birthday of his father, where also the Nazi grandfather shows up, even though Axel thought he is dead. Eyal decides not to kill the grandfather, but Axel does it for him. Eyal then marries Pia.

This interesting drama from talented director Eytan Fox talks in contemplative ways about the German-Israeli-Palestinian relationship, the past and the future, hate and love, sin and redemption and ultimately about the search for humanity. Simple and accessible, yet also demanding, the story symbolically speaks about some inevitable cycles of life, grasping at some inevitable truths that were accomplished thanks to a measured direction of the difficult subject. Through various scenes, the director subtly displays an ever unstable situation in the Middle East, but also decides to craft a sly essay about understanding the enemy, posing the question if the enemies in this generation could become friends in the next one, also adding his hidden trademark subtext about gay relationships, while all actors are in great shape, especially Lior Ashekanzi and Knut Berger. All in all, another quality made film about secret agents and their private life, even though one might complain about the slightly ephemera mood and occasionally artificial dramaturgy.