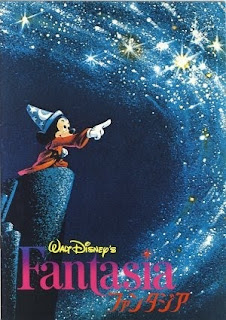 The Philadelphia Orchestra performs classic music for animated segments: clouds and lines float in the sky...Fairies and fishes dance in the water...After a sorcerer goes to sleep, Mickey Mouse takes his hat to try out some magic tricks. He orders a broom to use buckets to bring water to the local fountain, but eventually it can't stop and soon the whole palace is flooded. The sorcerer wakes up and nullifies the mess...A short history of life on Earth, starting from the microorganisms and ending with the extinction of dinosaurs...Olympus. The idyllic world of centaurs, fauns, Pegasus, Bacchus and others is disrupted when Zeus suddenly starts a storm and throws lightning bolts at them...Ostriches, hippos, elephants and alligators dance a ballet...A demon gathers evil spirits from the underground, but they are banished by church bells and a line of monks carrying lighted torches.

"Fantasia" is a phenomenal little anthology film assembled out of seven episodes, definitely the most abstract of all animated achievements by the Walt Disney studio, without its typical formulaic plot or cliches, that at some moments (especially in the first story featuring only illuminated lines and clouds in the sky) almost swims like a 'free spirit' through the spheres of the subconscious. If the opening live action introductions by the orchestral conductor of the Philadelphia Orchestra of the upcoming segments are excluded, each animated story is without any dialogue, serving as a giant experiment of conjuring up visual music, with the plots ranging from dinosaurs up to the idyllic ancient Greek creatures on Olympus, which is arguably the best episode - even better than the iconic Mickey Mouse vs. a walking broom segment - full of harmony and dreamy mood, with such enchanting sights as the one where Zeus cowers himself with a cloud and falls asleep or the Pegasus horses walking along the meadow. One could argue that the whole movie is just one giant excuse to promote classic music, from Tchaikovsky's "The Nutcracker" to Beethoven's "Symphony No. 6", yet each story is shaped and presented completely, just so much to work without any problem. Only the last two episodes are arguably a letdown, yet by that time the movie already left an enchanting impression which cannot be forgotten that easily.