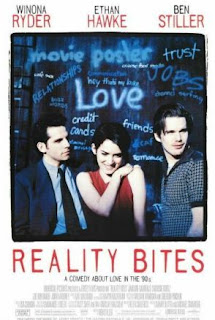 After graduation, Lelaina and her friends - Vickie, musician Troy and gay Sammy - face the challenge that every person in their 20s has to: the difficult process of living independently. Troy wants to be a musician and not "sell out to big corporations", Vickie is happy when she finds out she is not HIV positive after an unprotected one night stand whereas Lelaina can't seem to find a job anywhere. She films their home in some sort of documentary called "Reality Bites" and attracts the attention of TV executive Michael, who falls in love with her. Still, she decides to be with Troy.

Once labeled as "pretentious", Ben Stiller's directorial debut "Reality Bites" today seems almost sober and equally as relevant for modern generations due to its sharp, true, sad and unglamourous portrait of growing up. Frankly, "Reality Bites" is a 'horror movie' for people in their 20s, showing how tough it is to find a job and live in a world where achieving your dream is met with fierce opposition, yet luckily the melodramatic elements are downplayed to a minimum whereas the rather standard story flow doesn't seem to bother. The two stand-out performances by Winona Ryder and Janeane Garofalo are amazing, the cinematography is crisp and clear, some 'slice-of-life' details are inspirational whereas the film even accidentally predicted the rise of reality shows with the documentary of the heroine that was suppose to be sold at a MTV-like TV station. Though "Reality Bites" could have used more examples of brilliance and used stronger tone, it remains an interesting little film that captured the 'vibe of its time'.