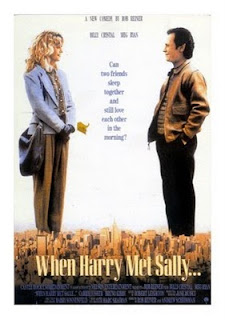 Harry and Sally first meet at the University of Chicago when they share a long drive to New York after graduation. He annoys her by telling that "men and women can never be friends because sex always gets in their way" so they quickly part...5 years later, she is in a relationship with Joey and meets Harry again in a flight, but again quickly parts...5 years later, Harry is divorced and meets her again. This time, since he is more mature, they become friends. They manage to match their best friends Marie and Jess, who is about to get married. Saddened that her Joey is getting married, Sally sleeps with Harry. Despite numerous arguments, they fall in love on New Year's Eve.

This woodyallenesque romantic comedy turned into one of Rob Reiner's most famous films which, despite flaws, still has some wise messages about human relationships even today: a lot of credit goes to the honest screenplay by Nora Ephron that won a BAFTA and gives those observations from the female perspective. Meg Ryan's fake orgasm sequence in the restaurant is already an instantly recognizable classic, a one that marked her whole career, yet the movie has many more "unknown" little humorous moments that all constitute a quality story. Maybe roughly 1/4 of Billy Crystal's performance really is too self-righteous and talkative, yet 3/4 of it are brilliantly funny and refreshing throughout (while in a museum, he suddenly puts on a Hungarian accent and says to Sally: "I have decided that we are going to talk like this the whole day!"; when he spots hieroglyphs he comments: "I have a theory that hieroglyphs are just an ancient comic-book featuring the character Sphyngy"). Likewise, Reiner manages to insert a few inventive directorial ideas, especially in the split-screen scene where Harry and Sally are both in their beds and watching "Casablanca" on TV, featuring double scenes of that film at the same time. A complaint must be aimed at the last third of the film, though, which loses its energy and turns increasingly stale and schematic, equipped with a typical happy end. "When Harry Met Sally..." is an successful film, yet there is still something missing to be considered a true classic.